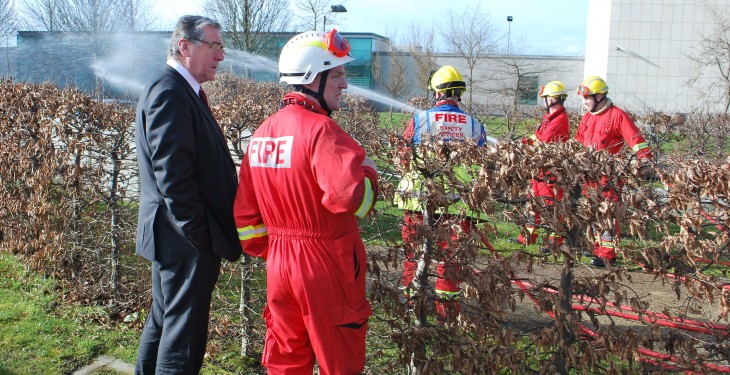 Minister of State at the Department of Agriculture, Food and the Marine with responsibility for forestry, Tom Hayes opened a recent seminar on wildfires and forest fires held in Laois County Council County Buildings, Portlaoise, Co Laois.

The seminar, hosted by Laois County Council in conjunction with the Forest Service of the Department of Agriculture, Food and the Marine, addressed the issues of wildfires and forest fires in the Irish countryside, which pose a very real threat over the coming weeks and months.

Delivering the opening address, Minister Hayes said: “The aim of the seminar is to foster greater partnerships at local and national level in relation to wildfire management”.

Citing the losses due to fires in recent years, the minister commented: “It is useful to put the forestry losses into context. In 2011, it is estimated that around 1,500 hectares of forestry were lost to fire. That represents almost a quarter of the total new planted area under my Department’s afforestation schemes in that year. The cost of fire suppression in and replacement of state-owned forests is estimated to have cost over €8m” adding that “The figure does not include the value of lost timber crops or the future wealth and employment that would have been generated as a result of their harvesting and processing”.

Welcoming the seminar, the minister said it was very timely in terms of creating awareness of the threat of fire and providing a forum for those involved in dealing with wildfires and their consequences to discuss actions to date and share knowledge and experiences.

Minister Hayes added that Laois County Council and fire services who are hosting the event, have valuable experience to share in relation to the benefits of a co-operative, pro-active approach involving land owners, communities and other stakeholders to wildfire prevention and control.

He also commended “the efforts of all of our emergency services, local authorities, farmers, land owners and forest owners who are working together to create awareness of the dangers and educate communities on fire prevention”.

Meanwhile, more than 700 landowners sought advice at Teagasc’s recent Forestry Advisory Clinics. Many clinic days were added to the nationwide series to cope with the demand for forestry advice. More than half of all queries related to planting forestry on the farm.

Investigating the possibility of planting some land, additional queries regarding an existing forestry grant application, and preparing for thinning were the three most common queries raised by landowners attending these clinics.

Dr Nuala Ni Fhlatharta, head of Teagasc’s Forestry Development Department, said: “The success of this year’s clinics was due to the significant interest in planting among farmers. The attractive incentives currently available and an ever increasing demand for timber mean that a forest enterprise is becoming an increasingly attractive option for more and more landowners.”

She added: “As in all crops, the importance of good management cannot be overlooked in relation to getting the best from a farm forest. Good and timely management will ensure that the benefits of the forest can be optimised with regard to financial returns, environmental benefits and on-farm uses including fuel and timber.”

Pictured: Minister of State Tom Hayes observing Forest Fire Pump Drills by Laois Fire and rescue Service as part of a seminar, hosted by Laois County Council in conjunction with the Forest Service of the Department of Agriculture, Food and the Marine, which addressed the issues of wildfires and forest fires in the Irish countryside, which pose a very real threat over the coming weeks and months