Get in tune with your livestock 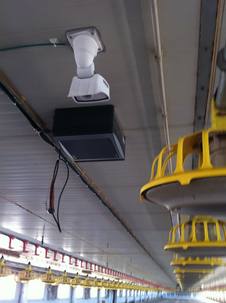 And do you know what, this is nothing new, the majority of Irish farmers know each of their animals by name, characteristics, parents and other traits. But what is new is the advancement in technologies on precision farming and Teagasc is to the fore in this research field.

In collaboration with 20 other agriculture advisory and research authorities across Europe, Teagasc is working on a blueprint for innovative precision farming tools to combat the challenges farmers face.

The project, entitled EU Precision Livestock Farming (PLF), is investigating the use of continuously automated measurements directly on the animal or its environment.

It says the recorded data, for example body movements and sounds, can be used for monitoring and management of livestock and translated into key indications for animal welfare, animal health, productivity and environmental impact.

According to EU-PLF, the modern farmer is confronted with increasing pressure to care for a larger number of animals in order to have an economically viable business. Pressures, it noted, will become more acute in future years.

“Due to scale, farmers dispose of less time for caring for each individual animal, while society expects animals to receive more individual attention,” it explained in an European Commission report on Eu-Funded Animal Production Research.

“It is increasingly difficult for European farmers to pay sufficient attention to individual animals and build a stronger relationship with them – not only in production-intensive sectors such poultry and pigs, but also in dairy production. This problem must be faced in the context of wider challenges, including increasing concerns about links between animal and human health, the need to reduce the environmental load of livestock, and the need to optimise the productivity of livestock farming to respond to a growing world population.”

The EU-PLF’s blueprint will be shaped as a manual with online website support.

“It will describe how to turn PLF technologies into robust, operational systems at farm level and how to use these technologies to create value for the animal, farmers and other stakeholders in the food chain. It hopes to capture quantitative information directly from the animal or its environment related to animal welfare, animal health, environmental load and productivity.”

Teagasc, along with the other agencies, are now identifying 50 high-tech SMES to commercialise the research once completed. “They will be challenged and encouraged by a competition to put in place the ideas of ‘PLF as a service’,” it added. So, as they say, stay tuned.

EU-PLF partners Fancom and SoundTalks successfully installed vision and sound recording equipment in a total of 15 pig and poultry commercial farms and a cough monitor in an experimental calf farm.

“A lot of data is being currently generated by the systems and being gathered by the equipments. The obtained data is being analysed to determine the best way they can be translated into indicators or management tools to better assist famers in the care of their animals,” explained EU PLF’s Rebecca Neilson in an update published this week.

“There have been a few technical and logistical problems encountered during the installation of the equipment and during the time of data collection. The problems range from lack of proper internet connection to mice eating the cables to unstable electric power and abrupt power-off. For each problem, a possible solution including a checklist of things to watch out for have been provided,” she noted.

The researcher continued: “The list of problems encountered as well as solutions used is a very important part of the ‘blue-print’ which will be the final result of the EU-PLF project; and thus have been and are still being carefully recorded. It is the aim of EU-PLF that the creation of the blue-print will assist others in their development of PLF devices.”

According to EU PLF, this includes labelling of the raw data received from the vision and sound monitors and creating models and algorithms to “translate” these data into key indicators of the health, welfare and productivity of the animals; dust and ammonia emissions assessment; and/or management tools for the farmer. Equipment in dairy farms is currently under progress.