Farmers’ thinking and expectations are being “conditioned” by the “drip feed of information” on the €100 million beef aid fund, according to newly elected MEP Luke ‘Ming’ Flanagan.

According to Flanagan, clarity is needed in relation to the details of scheme, as well as the publication of the submission made by the Department of Agriculture, Food and the Marine when it officially sought the aid.

“Instead of leadership, much needed financial assistance, and charting a way forward, we are getting a drip feed of information exploiting the difficult position that farmers are in, designed to condition farmers’ thinking and expectations in advance of the scheme being rolled out,” claimed the Roscommon MEP.

We need, as a matter of urgency, access to both the submission by our department and the full text of documents received from the European Commission. In the absence of this we are working in a vacuum, not knowing the basis upon which our submission was made.

“It is stated that the department made the submission on the basis of a significant risk of a no-deal Brexit and in light of current beef price difficulties due to the increased kill from the dairy herd. Why then are we now attaching conditionality to the suckler herd and ignoring the elephant in the room?” asked Flanagan.

He added that he has requested a meeting with officials from the Directorate-General for Agriculture and Rural Development (DG AGRI) to ascertain the facts and get access to the relevant documents.

“It’s worth noting if the €50 million coming from the EU is being granted under Article 219 of the CMO [Common Market Organisation] – ‘exceptional aid for market disturbance’ – there is no requirement in this article for reduction measures,” Flanagan highlighted.

Farmers should be very wary of this type of scheme, regardless of the attractive packaging it may come in.

‘Ming’ concluded by claiming that: “Our own Government and department see no value in our suckler herd and are quite content to sacrifice it to pursue the holy grail of dairy expansion.

“Is it just coincidence that these proposals are being floated in the shadow of a Mercosur deal that would decimate our beef industry? Never waste a good crisis is an old political adage that seems alive and well,” he added. 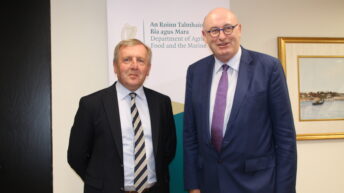