Five cows killed after train hits herd and is derailed

A train was derailed in the UK around 9.30pm on Sunday night (July 26) after it hit a herd of cattle who made their way onto the track in Kent.

Reports say that five cows were killed in the accident and none of the 70 passengers on the train were injured.

Kent Fire and Rescue said it sent four fire brigades to the scene and a spokesman said that two carriages were derailed.

Southeastern Railway said the accident happened between the villages of Wye and Chilham in Kent, involving a train travelling from Ashford to Canterbury.

The 70 passengers were evacuated from the train and taken to a village hall to wait for alternative transport.

Jonathan Calder, a passenger on the train, tweeted: “Everyone is fine but this train is going nowhere. Front coach derailed”.

He then tweeted a photo of the carriage in-front of him:

This is the coach in front of mine pic.twitter.com/6R37Z83CJb 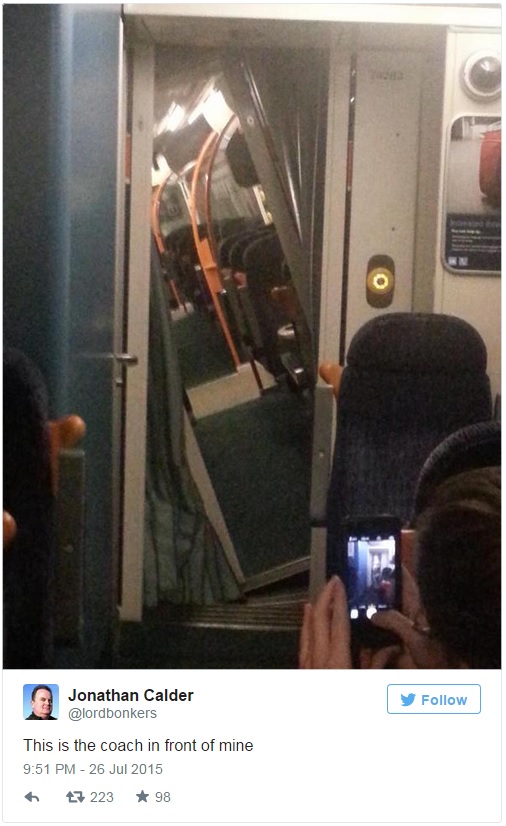 He then said that “the main thing is that no one was hurt. The railway staff and emergency staff were hugely impressive”.

A spokesman for Southeastern Railway, the operator of the train said last night (July 26): “We believe all staff and passengers are unharmed. Only casualties at this point are the poor cows”.

Southeastern Railway said that following the incident the line will remain closed until Wednesday (July 29).