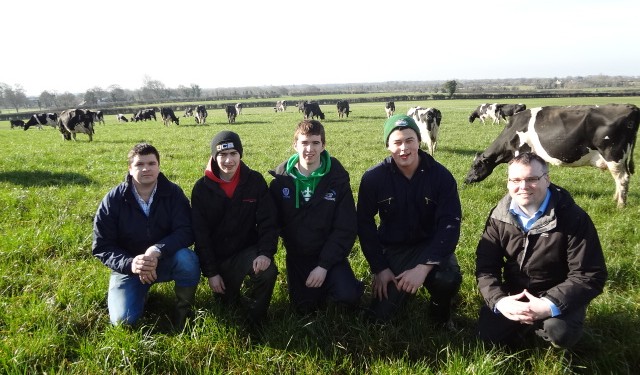 A total of 51 cows at Greenmount were turned out to grass for two to three hours/each day since 10 March. The cows have quickly settled and with current weather conditions grass use is good with minimal sward damage.

Speaking to Agriland this afternoon Dr Alastair Boyle, dairying technologist at the College  for Agriculture, Food and Rural Enterprise (CAFRE) said: “We are foremost an educational establishment. So we would always aim for an early turnout. It has been quite wet up to recently. But with high pressure moving in over the country and a spell of dry weather promised. We decided to get the cows out.

“Generally it would be a heavy type of ground here. However there are particularly dry fields, which the cows are in at the moment. Last year we got the cows out on the 28 February. But a week later they were in again with heavy snow.”

Dr Boyle stated: “Usually target the end of February early march for turnout to demonstrate the importance of the practice for students.”

He highlighted: “If ground conditions allow, early turnout may prove useful to dairy farmers, particularly as many are experiencing fodder shortages. Research at Agri-Food and Biosciences Institute in Hillsborough has shown that two hours of grazing can reduce silage requirements by 25 per cent, increase yields by up to 2.5 litres and raise milk protein by over 0.1 per cent. Taking advantage of good weather conditions in early spring will save silage, particularly if ground conditions are less favourable later in the season.”

At the moment the Greenmount herd is targeted to consume five kilos of grass dry matter. Dr Boyle said: “This is feasible as research has shown that cows can consume between two to three kg dry matter of grass per hour, as long as they are not going out full of silage.”

He added: “This grazing batch of cows are turned out with an edge to their appetite to maximise grass intakes. If ground conditions allow, turning cows out to grass can represent a saving in terms of silage and total costs of production. Weather dependent we hope to increase the period cows are at grass.”