Figures show fall off in dairy calvings so far this autumn

Dairy calf registrations since September are down 15%, according to latest stats from the ICBF.

Since the week ending September 4, just over 31,000 dairy calves have been registered this compares to well over 36,000 over the same period last year.

The fall of over 5,500 head could confirm the much-signaled move by many farmers away from winter milk production post milk quota abolition.

According to the Teagasc dairy specialist, Joe Patton, there are legitimate fears that the post-quota era will see farmers leave winter milk production. 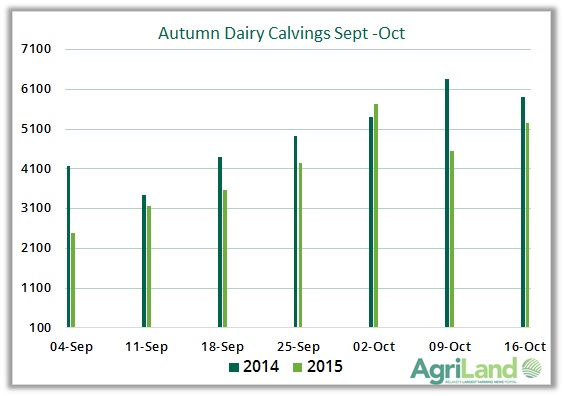 At the launch of the IFA’s Liquid Milk Handbook he particularly cited the most efficient winter milk producers as those which could be most likely leave the sector.

Patton said in a post-quota environment these guys will have opportunities and will have decisions to make.

“In some cases some of these liquid milk farms will be best served by exiting the sector. But, on the other hand, the farmers that are staying in it, they need some clarity and some certainty,” he stressed.

The fall off in dairy calvings so far this autumn is in contrast to a significant rise in calvings in the spring of this year.

Back in early April dairy calf registrations, since the start of the year, were currently running 16% ahead of 2014.

Figures at that stage showed some 754,538 dairy calves have been registered by farmers to date, compared with 649,671 over the same period last year. This represents a total of 104,867 extra calves on the ground compared to last years figures.