A livestock auction organised by a Co. Armagh farmer has turned into a children’s heart charity’s biggest ever single fundraiser – and there’s still one more sale to go.

The stands were packed as hundreds turned out to the event last Thursday night at Markethill Livestock and Cattle Sales to support the Powell family and their fundraiser for the Children’s Heartbeart Trust.

By the time the final gavel went down farmers from across the country had collectively raised more than £52,000 for the cause.

Over 200 head of cattle were included for sale – including an 21-month Charolais heifer purchased especially for the auction which made £3,600.

Over the last six years, he has raised thousands for the charity through the family’s business – farm supply firm WK Powell & Son.

But this year, he set the seemingly impossible target of raising £100,000 in just two nights – and has just passed the halfway mark.

The £100,000 target will go towards the purchase of a new portable echocardiogram machine for the Children’s Heart Centre being developed at the Royal Belfast Hospital for Sick Children. 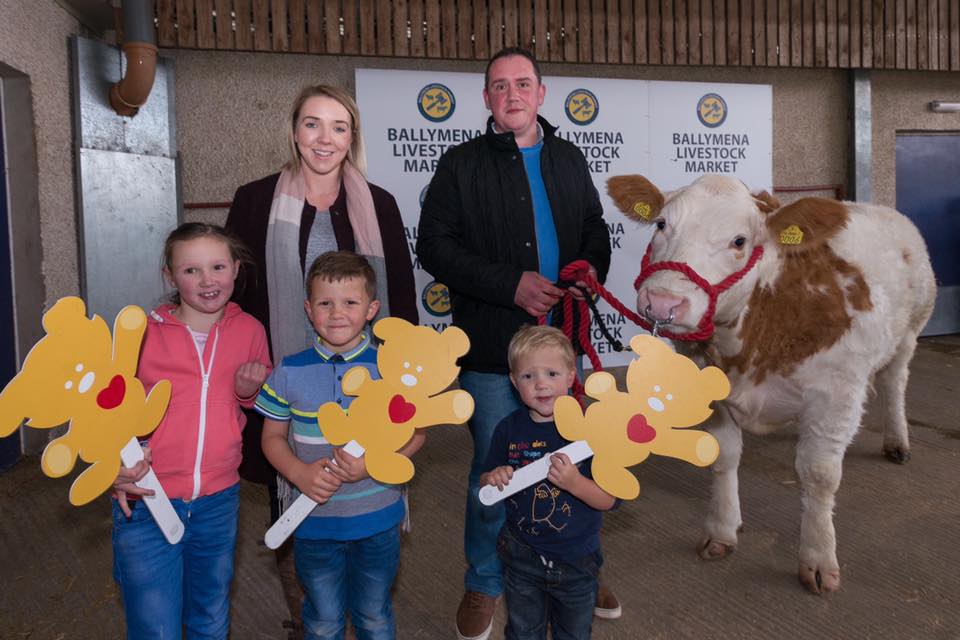 Grace has had a tough battle with CHD having underwent surgical procedures at just three and six months old and major heart surgery at the age of five.

Now eight, she is a still regular visitor to hospital for check-ups.

‘Amazed by the generosity of people’

Powell said: “The whole night went by in a blink. Being totally honest, I thought it was maybe a bit ambitious myself but I’m just amazed by the generosity of people.

“People are thanking me but it was the people who turned up and bid on the items who have really achieved this. If it wasn’t for the people who supported this there’s no way we would have done this.

I can’t say thanks enough – it’s alright for the people who set it up, but the people who actually put their hands in their pockets need recognition; they were the force behind it.

“The biggest end of it was the sale of items but I’ve had people come over to me and write out cheques and hand over cash just because they wanted to help.

“The place was absolutely packed – there were people that couldn’t get into to it.”

Star lots included 35 boxes of Bramley apples which sold for £100 each, a toy tractor at £1,050, a signed Ulster Rugby shirt which made £900 and two one night stays at the Roe Valley Hotel which hit £800.

‘A charity close to people’s hearts’

He said: “Last year we ran a show and sale for the Air Ambulance and it raised £33,000 – I never expected we would have another night equal to that.

The £50,000 for each auction was a big ask but people have really got behind this – I think because it is a charity close to so many people’s hearts.

“We just provided the platform and it was the customers who made it happen – people were very generous.”

Supporters will have their last chance to on Thursday night as the second and last of the two auctions gets underway in Ballymena.

The Ballymena auction will include a 30-month old heifer also bought especially for the fundraiser.

Which is the best anti-freeze to use in a sprayer?

ICMSA: No milk recording in eco-scheme ‘a fundamental error’