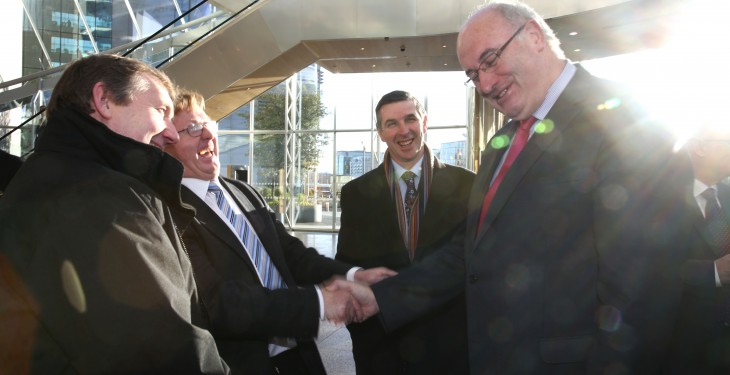 Farmers must get a ‘fair share of the cake’ was the resounding theme at the 60th anniversary of the IFA in Dublin this week.

Some 1,700 people gathered in Dublin’s Convention Centre where past presidents of the Association were interviewed by RTE’s Mary Kennedy about their time leading the organisation.

Former president Tom Clinton (1988-1990) said that there is no doubt that farmers of the world will produce enough food for 9bn or 12bn people in the world in the near future. “We have to be efficient but we have to get a fair share of the cake.”

He also said that the return for farmers is the biggest job facing farm leaders today.

However, he also said that the (dairy) industry is too fragmented in Ireland at the moment and has not developed as needed.

Alan Gillis (1990-1994) said to achieve something really good we have to do it under protest. “I do not think that is the best way.” He said it is often necessary farmers show strength of arm, but we need to be able to switch it off too. “But we should not dispense from protesting yet.”

Tom Parlon (2002-2006), who presided over the IFA during the 2000 beef blockade, said it was the 100% loyalty and support of the IFA membership which helped him through the crisis. The beef blockade initially cost the IFA €10,000 a day in fines which was increased to €500,000 per day – a fine which was avoided when Parlon and others resigned from their positions in the organisation, albeit temporarily.

Ex-general secretary Michael Berkery said the organisation must adapt and remain relevant in the future, a task he said he is confident it will do.

Current IFA President Eddie Downey said the IFA owes an immense debt of gratitude to the founding members of the NFA.

“The NFA’s primary purpose was to develop agriculture and advance the living standards of Irish farm families. This remains our core mission.”