Farmers lives made easier with apps 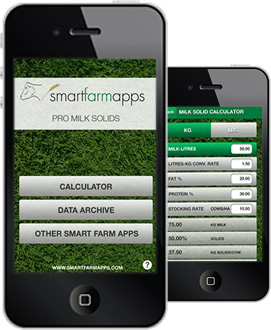 With smart phones becoming increasingly more popular with farmers, Kerrymen Tommie Slattery and Ryan Garner developed a series of apps for the farming community through their company Smart Farming Apps.

Speaking to AgriLand Slattery explained: “When I got my first iPhone I started using the apps all the time. I just thought that there was an opportunity there to create an app for farmers.

“I started thinking of all the different ways that farmers could use them be it dairy or beef farmers. I saw farmers writing down there grass growth records on a piece of paper and then going home to a computer and uploading the information.

“I just felt an app would make this so much easier,” he added.

According to Slattery: “We had no problem in the initial period designing the app. But getting a company to write the code and develop the app was a challenge. We eventually settled on a company in India.”

He noted: “I wouldn’t say it was overly difficult at the start. But there was a massive body of work there. It was really exciting.”

Pro Cattle Breeding: Tracks every aspect of the breeding season in detail monitoring submission rates and checking overall progress to make sure you are meeting your targets.

Pro Milk Solids: Enables farmers to stay on top of their milk profitability. This app has advanced milk solids calculator as well as a milk solids data archive.

Pro Grass Rotation: Enables farmers to manage grass wedge with ease. Enter, update and view critical data while on the move, walking the farm or going about your day-to-day. All data is easily exported for integration with other software applications.

The real challenge for Smart Farm Apps is the entry of massive companies such as John Deere, Dairymaster and De Laval into the market with apps for their own products, conceded Slattery.

“Within that there is an opportunity for us to work with those companies in creating their apps. This year we developed an app with Osmonds, the animal health company.”

On farmers use of smartphones, he said: “On the ground we are really starting to see a real increase in the numbers of farmers using apps. In Ireland we are a year away from all phones being smart phones. They have become central to people’s lives; everything is done on your phone now.”

Slattery also acknowledged the support of Kerry Enterprise Board. “They were hugely helpful to us. Without their support there would be no business.”