The charity event was organised by Monaghan IFA (Irish Farmers’ Association) and, in particular, Frank Brady, Monaghan IFA Chairman – who will be celebrating his 60th birthday on the night.

The barbecue will take place in Latton Community Centre, Latton in Co. Monaghan, with things kicking off from 7:30pm. Plenty of food, drink, music and fun is promised for the night.

The party will be in aid of: the suicide charity SOSAD (Save Our Sons And Daughters); the Alzheimer Society of Ireland; and Down Syndrome Ireland.

According to Brady, these charities are extremely important to rural Ireland: “SOSAD is very close to a lot of farmers in Ireland – particularly with the high rates of suicide in rural parts. This makes it very important for farmers, and is a cause farmers should get behind.

“Alzheimer’s is similar; everyone knows someone affected by the disease and it’s important to give our support to those dealing with the disease and their close ones. Down Syndrome also needs all the help it can get in providing great help for all who need it.” 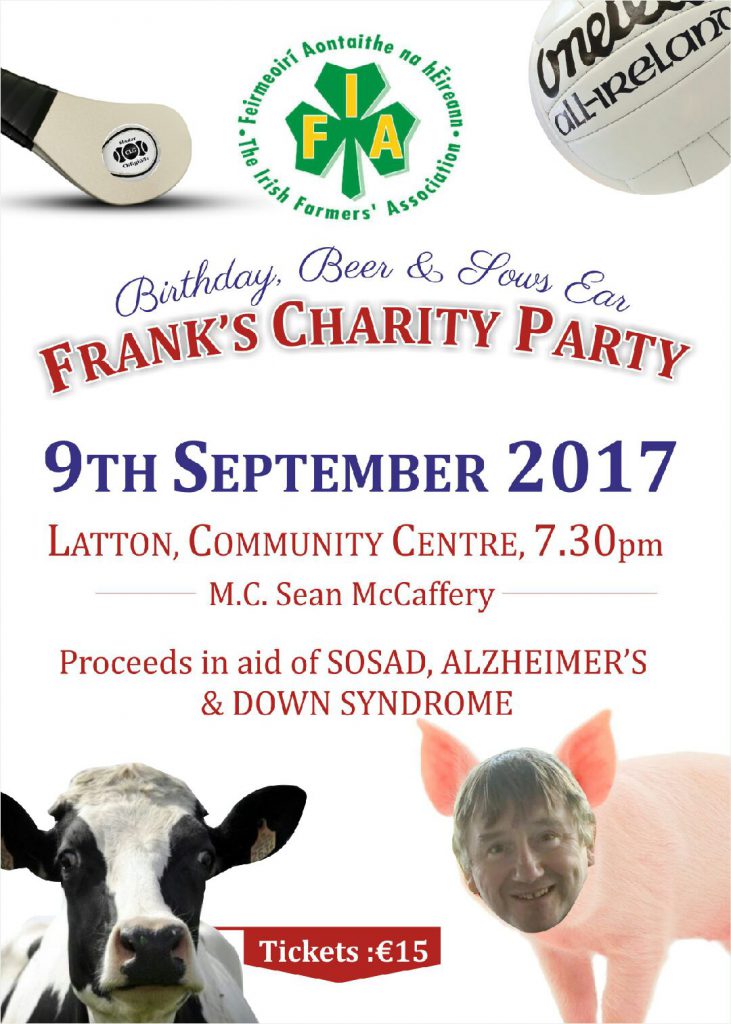 Monaghan GAA has strongly supported the event, providing two tickets for the All-Ireland Football Final, which will be up for grabs at the event – among other prizes.

An excellent spread of locally-sourced food is promised on the night. Nigel Renaghan, the IFA’s Poultry Committee Chairman and a member of Monaghan IFA, commented on this, noting: “Local producers have been very generous.

There will be two pigs on a spit – which come from Frank’s farm – on the night, along with burgers, sausages, chickens and plenty of other great food.

Music and entertainment will be provided by Sean McCaffrey on the night. The Tully twins – recognisable from their memorable appearances on TV3’s “Gogglebox Ireland” – will also be present at the event, among other special guests.

Tickets for the party are on sale from IFA members and local outlets and are priced at €15.

Brady, originally from Co. Galway but now settled in Latton, is well-known around the country in both farming and GAA circles – having trained various Monaghan county teams in football and hurling.

“The party is for a very good cause,” Brady said. “Everyone is welcome. People can pay on the night, so you don’t have to have a ticket to come along. A great night is guaranteed, so the more the merrier.”

The image above is sourced from Carnivore Style.