The first cows were milked on Gurteen Farm – a 34ha greenfield dairy operation – in Bandon, Co. Cork in the spring of 2016.

Now in its second full-year of production, the farm is home to 93 dairy cows owned by the share farmer John Sexton.

On Wednesday, hundreds of farmers were given an introduction to the farm and the current levels of performance being achieved by the herd of 75% crossbred and 25% Holstein Friesian cows.

A background to Gurteen Farm

Shinagh Estates, he said, is owned collectively by the four west Cork co-ops. These are: Bandon, Barryroe, Drinagh and Lisavaird. 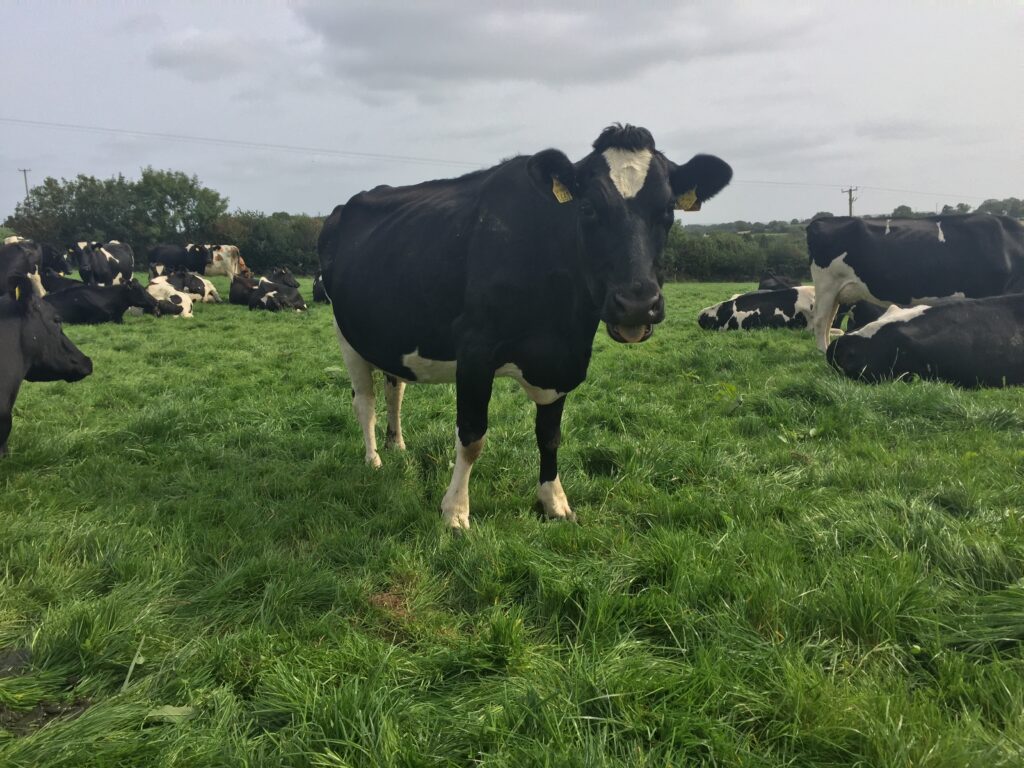 O’Donovan explained that the 34ha demonstration farm was converted from drystock production in 2015, to help identify the issues related to share farming in operating a dairy herd.

Prior to the conversion, Gurteen farm had been used to rear replacement heifers for Shinagh Dairy – a greenfield demonstration farm also owned by Shinagh Estates.

We financed the conversion of a drystock farm with no facilities, other than a cattle crush, to a dairy farm capable of handling 100 cows.

“There are, in effect, two separate projects running here: one is to see the costs of converting a dry stock farm to dairying; the second is the operation of a share farming agreement,” he said.

O’Donovan also spoke about the relationship with the share farmer, John Sexton.

“We have a great working relationship with John, who is doing an excellent job in operating the farm. We think we are in a win-win situation with such an excellent farmer.”

Sexton was appointed to the role as share milker on the farm at the end of 2015. Prior to this he had amassed experience by working on large-scale dairy farms in Ireland, England and New Zealand.

After finishing his training in Clonakility, Sexton spent an autumn and spring working as a farm assistant on William Kingston’s 220-cow herd in Skibbereen, Co. Cork. 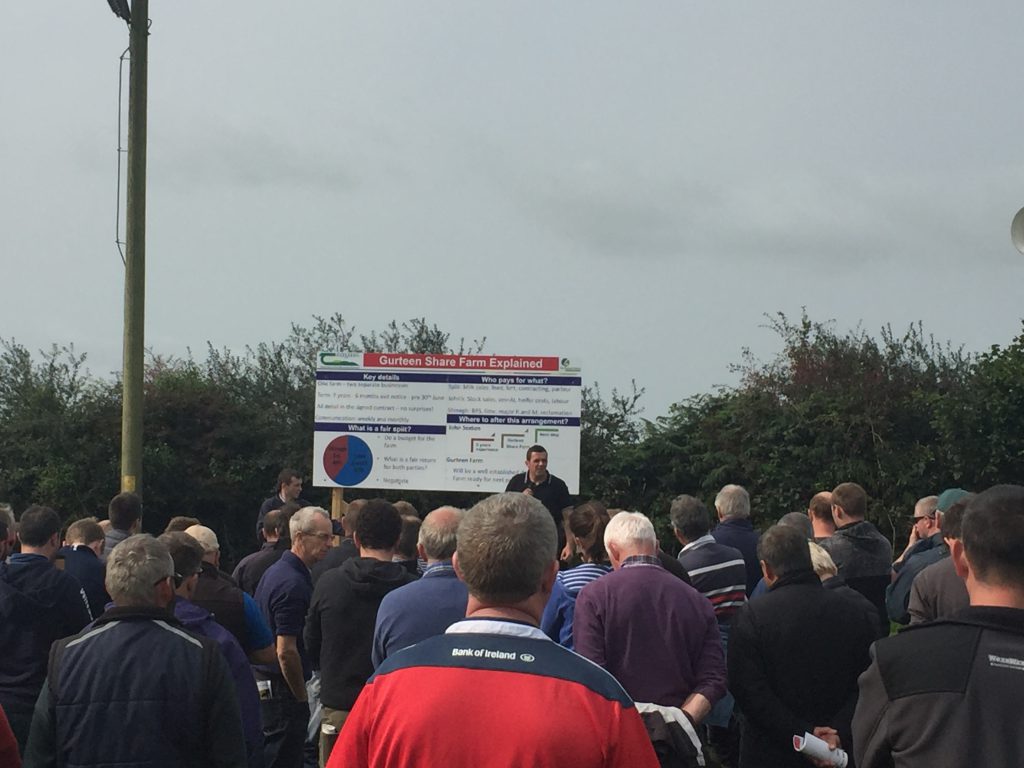 John Sexton speaking at the open day on Gurteen Farm

He credits Kingston as being a brilliant mentor and his guidance has helped him progress his dairy farming career to where it is today.

Kingston also advised the now share farmer to get some experience in New Zealand. Sexton followed his advice and went to work for Alastair and Sharon Rayne, in the South Island of New Zealand, as a farm assistant on their 700-cow farm.

Sexton spent one year working there before he departed for a large farming company in New Zealand called Grasslands. This move provided Sexton with additional responsibility, as he was now a herd manager – second in command to the farm manager.

Sexton spent 15 months working on this farm and completed two calving seasons before moving close to Manchester in England.

Once again, Kingston was instrumental in this appointment as he knew Ed Dale was looking for a farm manager for a 450-cow unit. Sexton gained three years of experience on this farm before returning to Ireland in 2015.

To add to the valuable experience he had gained by working on various dairy farms, Sexton also completed the Teagasc Strategic Planning Diploma – which is done through UCD’s Smurfit Business School.

Investing in the dairy operation

On his return, Sexton began looking for dairy farming opportunities in Ireland. In the back end of 2015, he was appointed to the role as share farmer on Gurteen Farm.

As laid out under the agreement between Sexton and Shinagh Estates, Sexton was required to bring his own cows to the operation.

Initially, he had sought unsecured finance from the bank; but quickly realised that, at most, the bank would make €60,000 available in this form.

As the €60,000 figure was insufficient to bring the cows needed to the operation, Sexton then sought to secure finance against a 28ha farm that he owned. 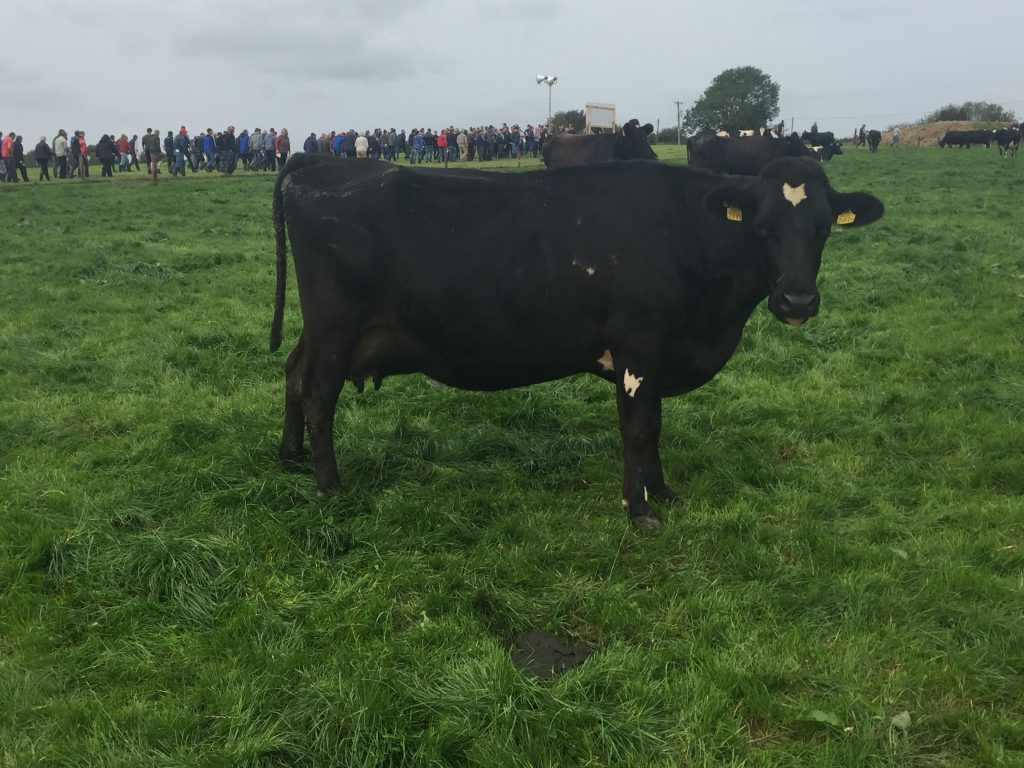 He described this land as being fragmented. But, when it was put forward as collateral, it allowed the Co. Cork man to secure finance to the tune of €120,000 – enough to bring in cows and heifers to get the system up and running.

“It was November when I found out I had got the job and the schedule was a little bit tight. I had my budget and my figures done out and had planned to buy 75 cows and lease 25 cows.

“But, I got the cows cheaper than I expected and it was a big bonus. With the credit line coming into play, I managed to purchase the remaining 25.

Also Read: What does a €2,600/cow investment get you on a greenfield site?

“The key principal of share farming, which differentiates from partnerships or other structures, is that this is one farm and there’s two separate businesses happening on it.

“If this was a partnership, there would be one bank account – it would be a joint bank account between John and Shinagh Estates – and all of the income and expenditure would go through that bank account.

“This is different, in that we have two separate businesses here; John has his own bank account and Shinagh Estates has its. 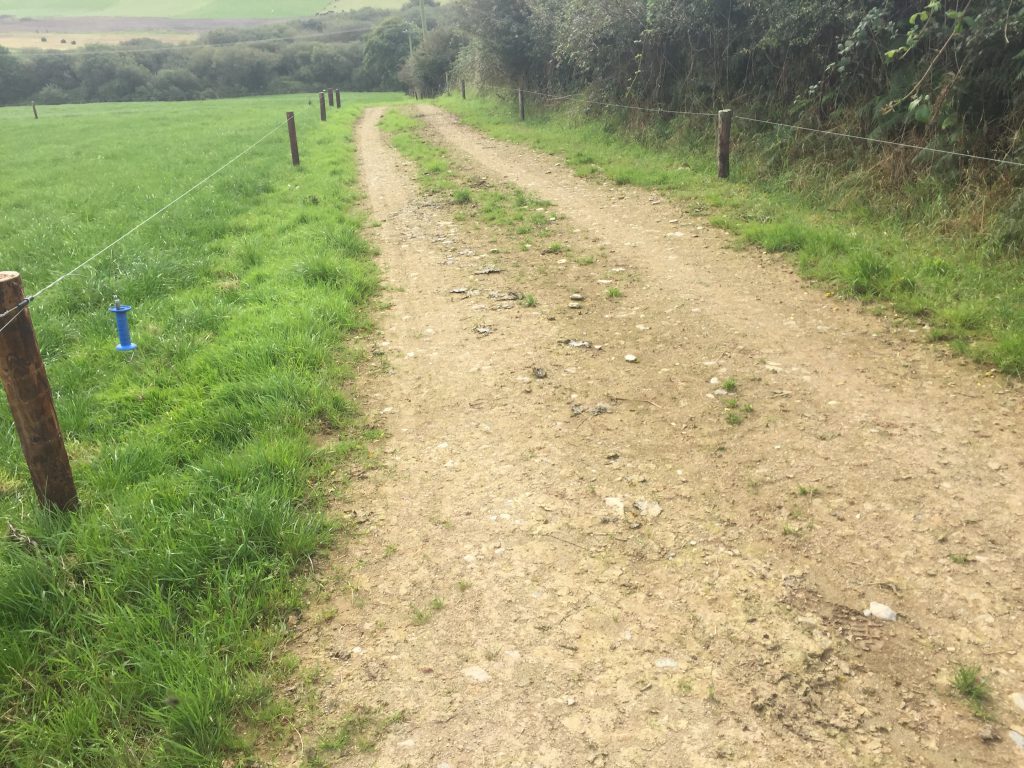 There’s two reasons behind that; not all expenses are shared equally on the farm and some people are responsible for different areas; and every collaborative farming arrangement must be set up to come to an end as simply as possible.

“By having two separate farming businesses here, both are separate and whenever the contract comes to an end, it should be much easier to divide the two businesses,” he said.

On the share farming contract, Kelly said: “It was signed up originally for a 7-year length. The main reason driving that was the 7-year repayment term required by John to bring some of the cows to the farm.

“There is a clause to that contract that says that after three years, either party can give six months notice if they want to end the arrangement.”

However, Kelly added, the governing factor defining that is there must be a minimum of six months notice given after year three and that must be given before June 30.

This means that the natural time for the arrangement to end would be the end of December and this gives either party at least six months to find alternative arrangements.

Prior to embarking on the project, Sexton had prepared detailed budgets to understand what split of the profits and expenses was required to make the system viable.

“Once I had done the budgets, I reckoned I needed 60% of the output to get a good return on my assets and to make it viable for myself.

Shinagh Estates figured out what it needed and they were happy with a 60:40 split.

Sexton explained that he brought all of the cows to the operation; there’s 93 milking here at the moment and I own all of the stock off them.

“Shinagh Estates put in the land and the buildings,” he said. In total, Shinagh Estates made an investment of over €260,000 to get the farm up and running. 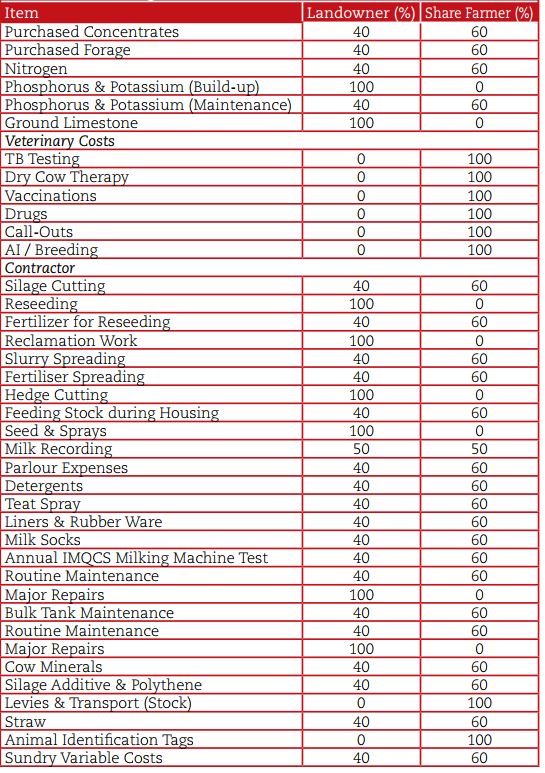 In addition, Sexton also covers all the labour on the farm and is in charge of the day-to-day running of the farm.

Furthermore, Sexton added: “What ever goes into producing one litre of milk is split 60:40 and what ever cost is attributed to the cows, like veterinary or AI costs, is covered by me.

“It’s the same with Shinagh Estates and the buildings. If there’s a breakdown in the parlour or reseeding is required, it’s all their cost.” 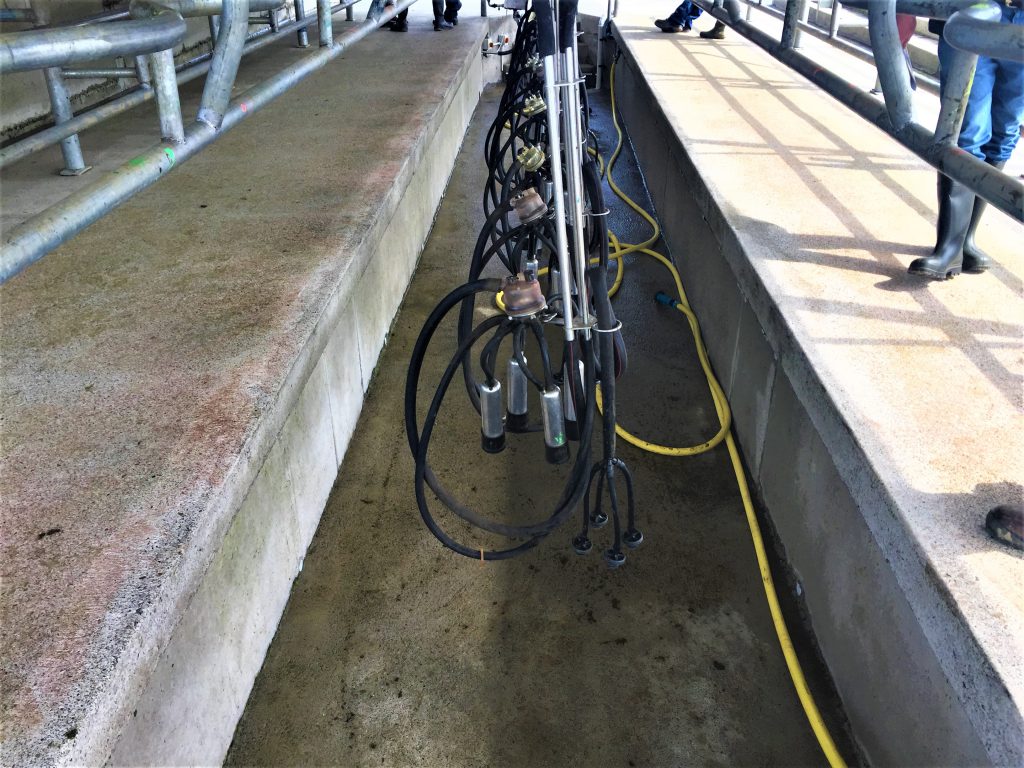 For phosphorous (P) and potassium (K) indices, Sexton said: “Shinagh is responsible for building them up to index three and four, and then it’s a split cost to maintain them.”

Grainne Hurley, Sexton’s local Teagasc Dairy Advisor, provided those in attendance with a run down of the farm’s finances and performance.

Initially, she said, Sexton purchased 40 in-calf cows and 60 in-calf heifers; the cows were brought into the system to maximise output and cashflow in the first year at Gurteen farm.

After a number of cows were culled, Sexton milked 92 cows in the spring of 2016. A further 10 in-calf heifers were brought into the system later that year.

“There are 93 cows milking on the farm this year, giving a stocking rate of 2.7 cows/ha.

In 2016, the herd produced 342kg/cow of milk solids; there’s 300kg/cow produced to date this year and I think they’ll produce 400kg/cow over the entire lactation.

“That will give us just under 1,100kg of milk solids/ha this year.”

The Teagasc representative also touched on the herd’s current performance, saying: “The cows are currently yielding 15L/day at 4.83% butterfat and 4.35% protein. They’re doing 1.45kg of milk solids on no ration. 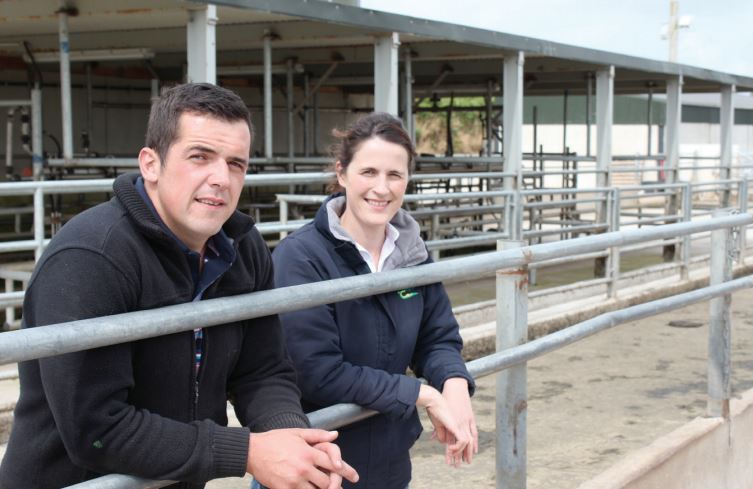 Hurley added that Sexton measures grass on a weekly basis and last year the farm grew 12.5t/ha – giving a utilisation of 10.2t/cow.

He fed 460kg/cow of concentrate to the herd last year. This year, to date, he has fed 208kg/cow and weather is going to dictate how much ration we feed for the remainder of the year.

“At the moment, there’s a lot of high-quality grass on the farm and the farm cover currently is 908kg/ha or 340kg/cow,” she said.

This spring, cows were turned out to grass on February 8 by day and were out full-time by February 14. To avoid too much poaching, while optimising grass in the diet, Sexton practiced on/off grazing by getting cows out to grass for a minimum of 3hrs after each milking.

Having a good network of roadways and paddocks ensured cows got as much grass into their diet as possible.

Sexton’s herd encompasses a mixture of crossbred and Holstein Friesian cows. Cows started calving on January 29 this year and 50% of the cows calved within the first 27 days of the season.

“The 6-week calving rate did slip from 70% last year. But the replacement rate was low this year, as he is trying to maintain the cow numbers he has,” Hurley said.

The low number of in-calf heifers added to the herd in 2017 reduced the 6-week calving rate, as most of these would normally calve in the first six weeks of the season.

Only 11% of the herd are first lactation animals this year and, now that the herd is settled into the farm, it’s hoped that fertility will improve further in 2017.

Sexton hopes that more than 80% of the cows in the herd will calve in the first six weeks of the calving season next spring.

The financial ‘nuts and bolts’

Last year, Gurteen Farm produced a net profit of €1,574/ha or €1.68/kg for each kilogram of milk solids produced on the farm.

This profit figure was generated from a dairy output of €3,850/ha, variable costs of €1,664/ha and fixed costs of €612/ha. A detailed breakdown can of the costs can be seen in the table below: 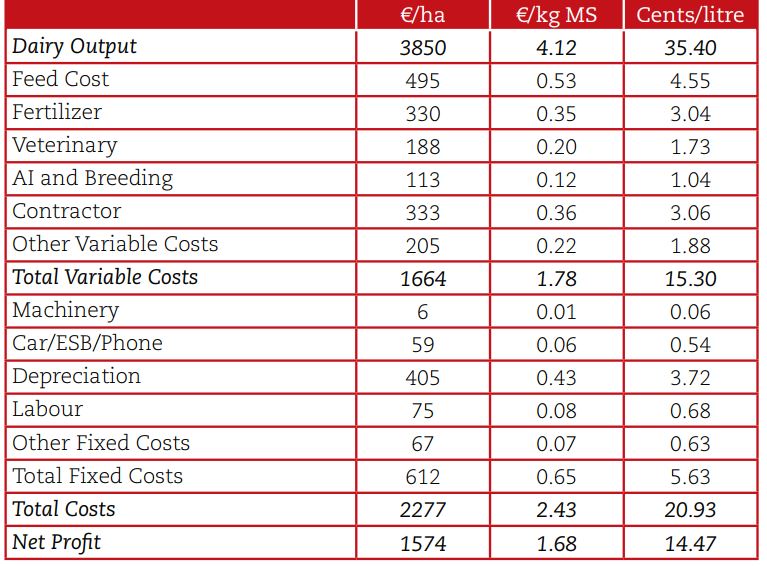 All replacement stock are owned by Sexton and could be included in his income figure if he were to sell them.

In addition, Sexton’s return of €37,514 must cover the following:

Sexton also discussed his plans once his tenure at Gurteen Farm is over.

“On leaving here, I would be looking to double the herd size in the form of another share farming agreement, farm lease or a farm partnership – all options will be considered.

I would be looking to go up to 250-300 cows, but that depends on how much money the bank will give me.

“As a share farmer, it would be progression and I have taken steps up the ladder every two-to-three years and I want to keep going,” he concluded.

Grazing infrastructure - if you build it, the cows will come