Farm investment on the rise

On farm investment is on the rise again, following a dramatic fall off in spending over the period 2009-2010.

According to the Department of Agricultures Review and Outlook document gross ﬁxed capital formation, or capital investment, in agriculture experienced a dramatic collapse back in 2009 having climbed to record highs in the few years preceding.

Most of the decrease was attributable to investment in farm buildings which, based on CSO data, reached a record level of €1,306 million in 2008, up 105% on 2007, only to drop by 81% to €244m in 2009. Although it should be noted that the increase in investment in farm buildings in 2007/8 was largely attributable to the Farm Waste Management Scheme, with one of the criteria of the scheme being that all building work had to be completed by the end of 2008, the overall investment amount (excluding breeding stock) dropped by a further 36% in 2010.

However, as the graphics below show, the situation has improved considerably over the last three years. Latest figures show that investment overall (again excluding breeding stock) has risen by 79% in three years, with farm buildings spend up 196% and other equipment expenditure up 47% on the 2010 ﬁgures.

Investment in agricultural machinery increased rapidly from 2010 to 2012 (over 200%) but fell 45% in 2013 to €150m. This means that the total investment level is slightly higher than 2006, before both the spike associated with the FWMS and the subsequent ﬁnancial crisis. 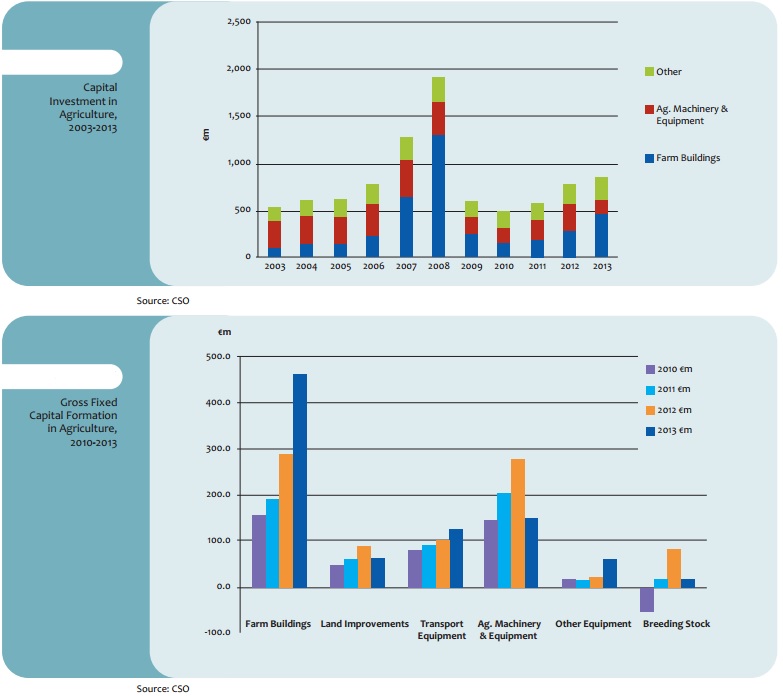