Fall in dependence on UK and France for sheepmeat exports

Ireland’s dependence on the British and French markets for sheepmeat exports has fallen by 21% since 2009, according to Bord Bia figures.

The UK and France continue to be the core markets for Irish sheepmeat accounting for 60% of total export volumes.

However, Bord Bia’s figures show that they continue to lose ground as their value share of exports has fallen from 63% to just below 55% in the last two years.

According to Bord Bia’s Export Prospects and Performance report 2014/2015, sheepmeat exports to France eased slightly last year to 18,000t and were valued at €90m while shipments to the UK stood at around 9,000t. 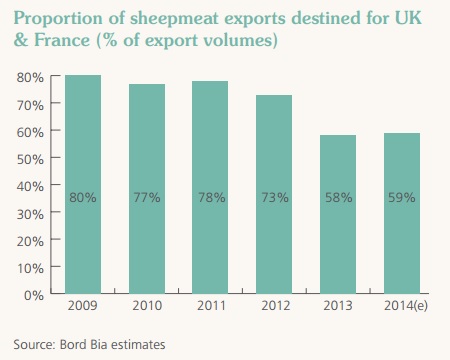 It says while Switzerland commands pole position for the highest €/tonne price return, Denmark which has registered 21% volume growth in the last year earned a 60% premium above the average global export price.

Bord Bia also says while Belgian sheepmeat imports have fallen by a third since 2009, due to a 75% reduction in New Zealand exports, Ireland has grown its exports threefold.

In 2014, Ireland exported an estimated €20m worth of sheepmeat into Belgium.

Irish lamb exports to Sweden also performed well last year, according to Bord Bia with volumes estimated to have reached 3,500 tonnes in 2014.

According to Bord Bia, this meant Ireland overtook New Zealand to become Sweden’s largest sheep meat supplier in 2013 accounting for almost 30% of imports.

Bord Bia also says in Denmark Ireland has become the number one imported supplier accounting for almost one in every four tonnes of sheepmeat, equivalent to 1,100t.