Exports of UK dairy at a record high, Ireland remains its top market 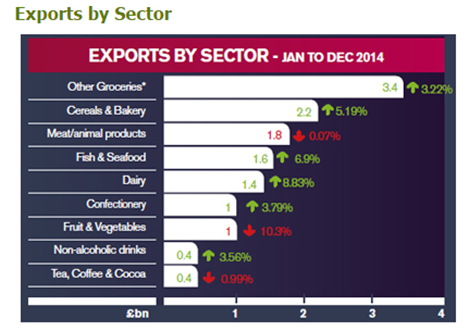 Exports of UK dairy products are at a record high, the UKs Food and Drink Federation (FDF) says.

It says that UK dairy exports are up by 8.8% to £1.4 billion and the top three product categories for exports last year were salmon, chocolate and cheese. Cheese exports increased by 5.6% and make up a third of overall dairy exports, it says.

The report shows that Ireland is the UK’s number one market to export its products to with France and the Netherlands the next two top importers of UK products, the report by the FDF shows.

The report also found that food and non-alcoholic drink exports have almost doubled in value over the last decade, from £6.5 billion in 2004 to £12.8 billion in 2014.

Steve Barnes, the FDF’s Economic and Commercial Services Director, said that this performance shows that British food and drink is in demand across the globe and that food and drink is bucking the trend when it comes to exports.

“High demand from international markets for our food and drink must be at the heart of the country’s strategy for economic growth and we look forward to working with the Government to capitalise on this opportunity,” Barnes said.

The UK’s Parliamentary Under Secretary of State for Farming, Food and the Marine Environment George Eustice said that these new figures are further evidence of the global appetite for British food which was worth a record £103 billion to the UK economy in 2013. It is particularly encouraging to see UK dairy exports at a record high as our farmers seize new opportunities to export abroad and grow their business, he said.