Live exports of cattle to Northern Ireland are up some 38% on the back of a significant fall in the value of the euro against pound in recent months, according to the latest figures form Bord Bia.

Its data shows that some 10,559 cattle have been exported across the border so far this year compared to 7,610 in the same period in 2014.

“This means that Irish cattle represent better value now than in 2014 and this has created more interest from Northern buyers for all categories of cattle but especially for weanlings and store cattle,” he said. 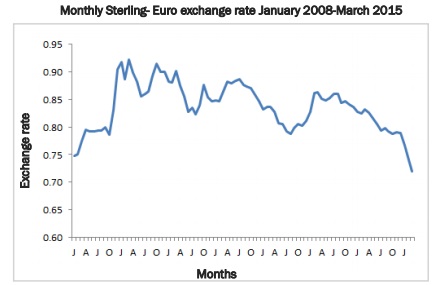 What about the ‘nomad cattle’ issue?

‘Nomad cattle’, or cattle from the South for sale in the Northern Ireland, can be sold directly to abattoirs in the North but a price penalty is being applied, because some customer specifications do not allow for the cattle to have spent time in more than one jurisdiction.

According to Zeig, despite the increase in trade in recent months, fundamentally the market for Irish cattle sold to Northern Ireland has not changed.

The beef from cattle born in the Republic of Ireland will not be eligible to be sold in British multiple retail, he said.

However, Zeig did say that it can be sold to customers where the British born, reared and slaughtered is not a requirement. He said this is the case with many customers on the Continent or wholesale and foodservice customers in Northern Ireland and Britain.

€7m ‘saving’ moved from forestry to other schemes

Call for end to retrospective milk pricing in NI