Expectation that euro will remain weak for two years or more

However it says on the flip side a weak euro can have an adverse impact on the price of imported inputs such as feed and fertiliser, making them more expensive than otherwise would be the case.

According to Teagasc, internationally the slowdown in growth rates in China has placed downward pressure on the value of the currencies of major commodity exporters such as Australia and Brazil, which have both lost ground against the US dollar.

Falling dairy commodity prices have also led to a depreciation in the value of the NZ dollar in 2015, it says.

With no scope for further interest rate reductions, the ECB’s capacity to kick start the Eurozone economy has become more limited. In early 2015 the ECB finally announced a programme of bond buying which effectively amounts to quantitative easing, the programme is designed to increase inflation and reduce the value of the Euro in order to make the Eurozone more economically competitive.

Apart from low economic growth, very low inflation and high unemployment, the Eurozone is also afflicted with concern for the future of Greece as a member of the currency union, which has generated negative sentiment about the Euro currency.

The strong performance of the US economy means that it is close to the end point of its own quantitative easing programme and this has created an expectation of increased interest rates which has boosted the value of the US dollar thus far in 2015. 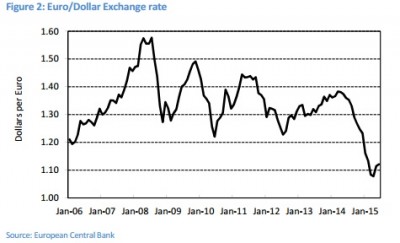 As shown in Figure 2, the combination of these two effects has meant that the euro has lost significant ground against the US Dollar in the first 6 months of 2015, falling from US $1.23 in December 2014 to US$1.07 in April before recovering somewhat to US$ 1.12 by June 2015.

Overall, in the first half of 2015 the Euro has been at its lowest level against the US dollar since the early 2000s.

Given the strong performance of the UK economy in comparison to the Eurozone, Sterling has also strengthened against the euro in 2015. As illustrated in Figure 3 Sterling rose in value from 78p per euro in December 2014 to 72p in June of 2015.

The Bank of England has also signalled that a UK interest rate rise is imminent and this will further strengthen the value of Sterling.