Fragmentation can present a particular problem for farmers who wish to expand milk production.

Any land beyond walking distance to the parlour (or robot) cannot contribute to milk from grazed grass. Tunnels and even bridges may play a role, particularly where a busy road dissects the land.

Bringing in feed from outblocks and increasing stocking rates (somewhat) on the grazing platform can also help.

Teagasc researchers at Ballyhaise have looked at another option: radically increasing stocking rate on the grazing platform to the point where the conversion of grass to milk solids is maximised and winter forage is imported.

Summarising the key difference between the 3.1 cows/ha and the 4.5 cows/ha systems:

We assumed that the winter feed was purchased at an average cost of €150/t DM, which would be the same cost if a farmer were to rent land and grow their own crop.

We achieved a higher output of solids per hectare but, interestingly, increasing the stocking rate to 4.5 cows/ha had no effect on grass grown or utilised.

Therefore, the extra milk produced was essentially bought in as the level of concentrates and silage consumed had to be increased substantially to plug the deficits in the feed budget.

In my opinion, grassland management is more difficult at the high SR as you have a demand of 75kg DM/ha, so deficits occur more often and will last longer.

Maintaining good grass utilisation while feeding silage was a particular challenge and required accurate daily allocation of both grass and silage.

The secret to profitably expanding production from any block of land is to increase the production of grass from pasture, while keeping concentrate feeding constant.

The average dairy farmer in Ireland could potentially increase production by 60% to 70%, at low cost, on their existing land block through improvements in grass management.

Dairy farmers, in particular, need to carefully consider that an outside block can be an asset but it can also be a liability.

On the positive side, it will allow you to increase cow numbers on the grazing platform if you can export silage production and heifer rearing to outblocks.

You may also be able to leverage its asset value when borrowing.

On the less positive side, owning an outside block can tie up capital with a low return. It may divert attention and management time from the core business, increase workload and complicate your farming operation.

From an economic point of view, the higher stocking rate system is a higher-cost system, which means it is more vulnerable to fluctuating milk prices and also other external factors like feed prices and severe weather events.

For this reason, it is not a sustainable system of milk production and should not be viewed as a long-term expansion strategy.

It may, however, be used as a short-term solution for farmers who wish to build up stock numbers that could be used to stock a new block of land or a second unit. In this case, the home farm must be capable of growing at least 16t DM/ha.

High quality forages must be sourced at reasonable price, sufficient housing and feeding facilities, in particular, must be in place, base milk price must be above 34c/L and finally, grassland management must be excellent.

While some may well try such systems in the coming years in an attempt to drive increased production, for the majority this will not be viable, even for a short period. 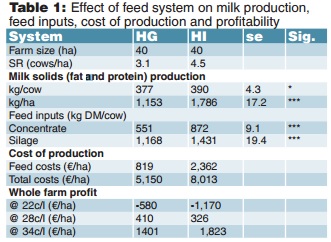