The first John Deere 9900i self-propelled forage harvester to be sold in Europe is owned by a contractor in Northern Ireland. The machine belongs to Lagan Brothers of Moneymore.

Started in 2003, the business is run by Michael Lagan (pictured above) and his brothers Seamus and Paul, with father James and younger brother Noel also taking an interest.

Supplied by John Deere dealer Johnston Gilpin & Co of Lisburn after a ‘Golden Key’ handover at the Zweibrucken factory in Germany, the 970hp 9900i is the most powerful of the new 9000 Series self-propelled foragers launched by John Deere last year. 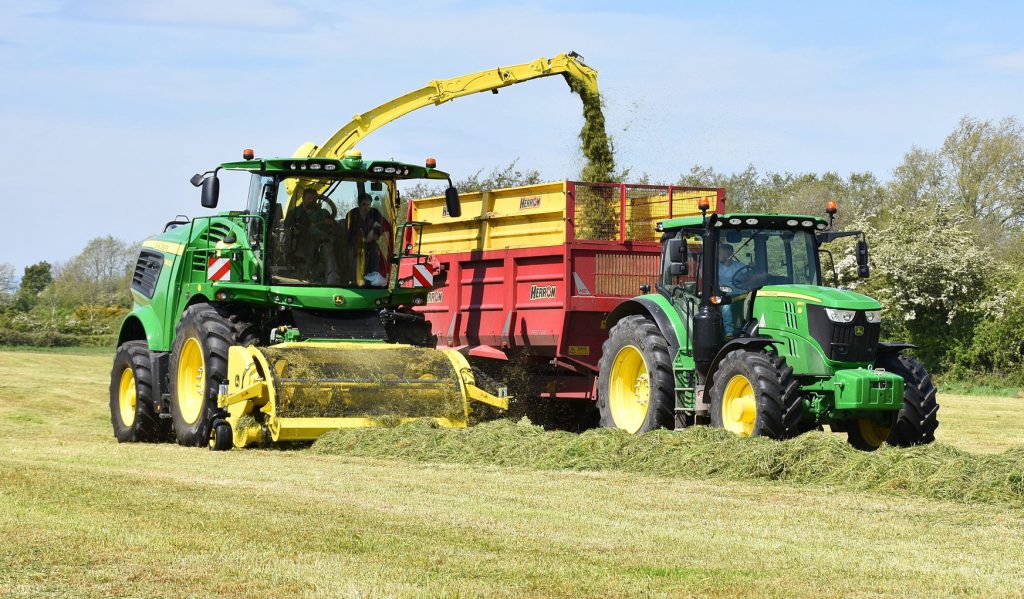 Key features of the range include a new V12 Liebherr engine on the top three models and a new ‘XStream’ kernel processor (corn cracker).

Michael Lagan, who operates the 9900i, said: “We needed to upgrade our two-year-old John Deere 8800i with a more powerful machine.

Each year, we harvest around 7,000ac of grass and 70% of that is destined for biogas plants.

“These plants need finely chopped material down to 4mm that is easily digested, so we made the decision to upgrade to a machine with more power and more knives – 64; compared to 56 on our previous machine.”

He added: “It’s more or less the same physical size as the 8800i, but you feel the difference the bigger engine makes.”

Michael also commented on John Deere’s HarvestLab sensor, which is designed to measure dry matter and other constituents in ‘real-time’. All data, including crop yield per field, is displayed inside the cab.

“We’ve used the system for a number of years now and find it extremely useful in keeping us informed about crop quality and yield,” he explained.

“Another handy feature is that we use it on the dribble-bar when spreading slurry. On that, it can give us information – such as nitrogen content – and it works out how much slurry we can apply per hectare.”

Alongside the new forager, the business operates a fleet of John Deere tractors ranging in age from 2006 to 2019, including one 7R Series and four 6R Series machines plus three older 20 and 30 Series models.