European urea prices down 44% in the last three years

European Nitrogen (N) fertiliser prices have been slowly decreasing since 2013, according to European Commission.

In its latest outlook for the agriculture sector, it outlined that over the five first months of 2016, urea average price was 44% below its level in the first half of 2013 and DAP price (Diammonium phosphate composed of both N and P nutrients) was 26% below, also during the same period.

According to the Commission, this price decrease was mainly driven by lower US natural gas prices (shale gas effect), which led eventually to a progressive decrease in the European Natural gas price starting from late 2013 (by 63% over the same time period) and lower oil prices since 2014. 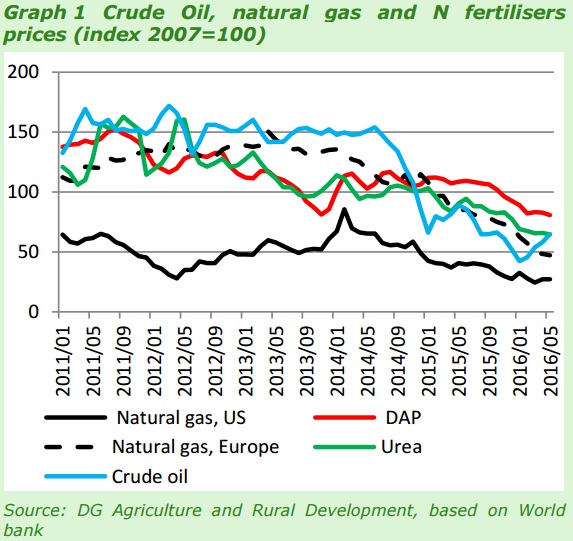 Therefore, European natural gas prices finally seem to benefit from the decrease in energy prices reducing the costs of production of N fertilisers.

In addition, the Commission also said that lower crop prices and the appreciation of the USD weigh negatively on the demand for fertilisers, and the decrease in N fertiliser prices should last throughout 2017, despite the recovery in crude oil price.

At the International Fertiliser Industries Association Conference in Moscow this week, IFA President Joe Healy said the EU Commission must move immediately to eliminate anti-dumping and customs duties on fertiliser imports into Europe.

“Following on from talks with a number of the world’s major manufacturers, it is clear that the imposition of EU tariffs is a major barrier to trade, which is preventing real competition and costing Irish and European farmers an extra €1bn per year at a time when farm incomes across the tillage, dairy and livestock sectors are in crisis”.

The IFA President pointed out that the annual cost of the EU import tariffs on European farmers is almost the equivalent of the entire EU basic payment to Irish farmers.

Joe Healy said the EU Commission cannot stand over a situation where European farmers have to accept world prices for agricultural produce while we are forced to pay uncompetitive prices for key inputs such as fertiliser.

“The net worth of the major EU fertiliser manufacturers has increased year-on-year for the past decade, as they have made exorbitant profits in a highly protected market at the expense of Irish and European farmers,” he said.