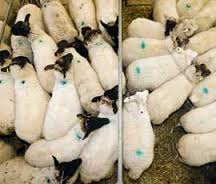 It says factories are now quoting in the region of €4.80/kg, but in many cases farmers are paying out €5.00/kg.

Meanwhile an increase in sheep production is expected over the next two years driven by profitability gains in the sector. This is according to the European Commission’s Summer 2014 Short-Term Agricultural Outlook.

It says sheep production gives signs of stabilisation since 2011 due to increased profitability in the sector.

The report outlines that revised data for 2013 production show a slight recovery after the strong drop in the previous year. More slaughterings in the EU-N13 (in Romania and Bulgaria) filled in the gap left by slightly lower volumes being produced in the EU-15. Heavy lamb prices, at 572 EUR/100 kg in May, are 15% above the 2012-13 average. Light lamb prices are 2% below the 2012-13 average but still at the high level of 582 EUR/100 kg in May.

While price levels have fallen back significantly in Ireland since May the European Commission says these price levels, combined with good forage conditions in the north of the EU and lower cereal prices, implied lower production costs and stimulated a moderate production expansion in 2013 which is expected to continue in both 2014 and 2015.

In addition, the possibility of a certain degree of coupled support announced by some Member States in the framework of the 2013 reform of the Common Agriculture Policy is likely to contribute to the sector profitability. However, the drought affecting the pasture, particularly in might limit production growth in 2014.

The report also points to shortages in lambs in New Zealand, and consequently an expected lower 2014 production, are expected to drive the EU sheep imports 2.5% down; additionally, New Zealand is diverting more and more volumes to closer destinations as China and Saudi Arabia (shipments to these two destinations in the first quarter of the year were 30% and 13% higher compared to 2013). More imports from Australia will not fill the gap.