EU milk deliveries increased by 5.5% in November, the highest monthly increase in 2015, according to latest data from the Milk Market Observatory (MMO).

The data also shows that EU milk deliveries between January and November were up 2.2%. The increase in production comes as milk prices remain at low levels across Europe.

According to commentators, markets continue to bounce along the bottom in Europe. Currently, if dairy product values were expressed in a milk price they would equate to between 20c-21c/L. 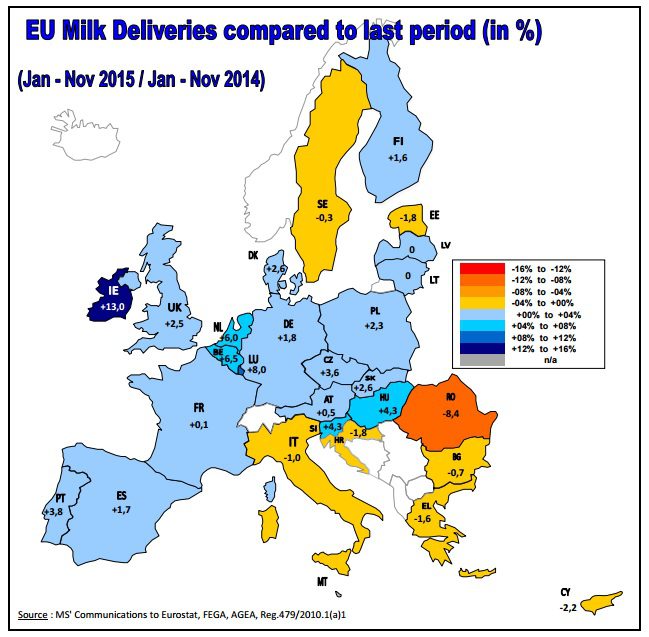 According to a recent dairy market update from TJ Flanagan of ICOS, much of the increase in milk production across Europe is as a result of the benign production conditions over the recent season, coupled with low input costs and milk prices which were slow to drop, have prompted extraordinary and unpredicted milk supply growth, particularly across Europe.

He highlights that among Europe’s larger producers, only Italy has seen a production decline, with significant growth in Ireland, the Netherlands, Belgium, Germany, Poland, the UK, and even Spain.

Half of European milk production growth in intervention or PSA

High EU milk production has resulted in an increase, since April, in the production of SMP by 8.7% and butter of 4.8%, according to Flanagan.

Furthermore, he highlights, that between the end of June 2015 and Jan 4, 2016, 46,639 tonnes of SMP were offered into intervention. He also said this should be considered alongside 71,489 tonnes of SMP in either the 210 day or 365 day private Storage Aid Schemes.

“With Europe running at around 2% up on production, it is apparent that nearly half the growth is being put into either Intervention or PSA.

Flanagan said it is clear that the market will remain weak until either consumption grows in response to low prices; difficult, given low oil prices and poorer developing countries, or supply growth eases significantly.