The sale is in its fourth year of being hosted by the Irish Charolais Cattle Society and for most breeders selling animals at the sale, it is certain they will agree in calling it a “memorable” trade.

A total clearance rate of 92% was achieved along with an impressive average of €5,302; which is an increase of over €2,150 on last year’s sale average. This sale average was aided by the fact that four heifers sold for a figure exceeding €10,000.

An interesting point to note on the nine highest priced heifers at the sale, is that eight of these females were the result of embryo transfer.

It was one of the best sales in the history of the society. We believe the sale average of over €5,300 is the highest average ever achieved at a Charolais Society sale.

“We had breeders from northern and southern Ireland buying heifers along with new breeders, so it was great to see the demand that is there for Charolais cattle.”

The highest price on the day of €13,200 was secured by a pre-sale favourite, Ballymorrishill Prettypolly (et) (pictured above). This high-priced female was shown by Paul Sheridan from Kilcogy, Co. Cavan. Prettypolly is sired by Aimable and out of an Inverlochy Gurka-bred dam.

She had previously been a numerous prize-winner at summer shows during 2019, with one of her most notable accolades being awarded Reserve Junior Heifer Champion at Tullamore Show in 2019. 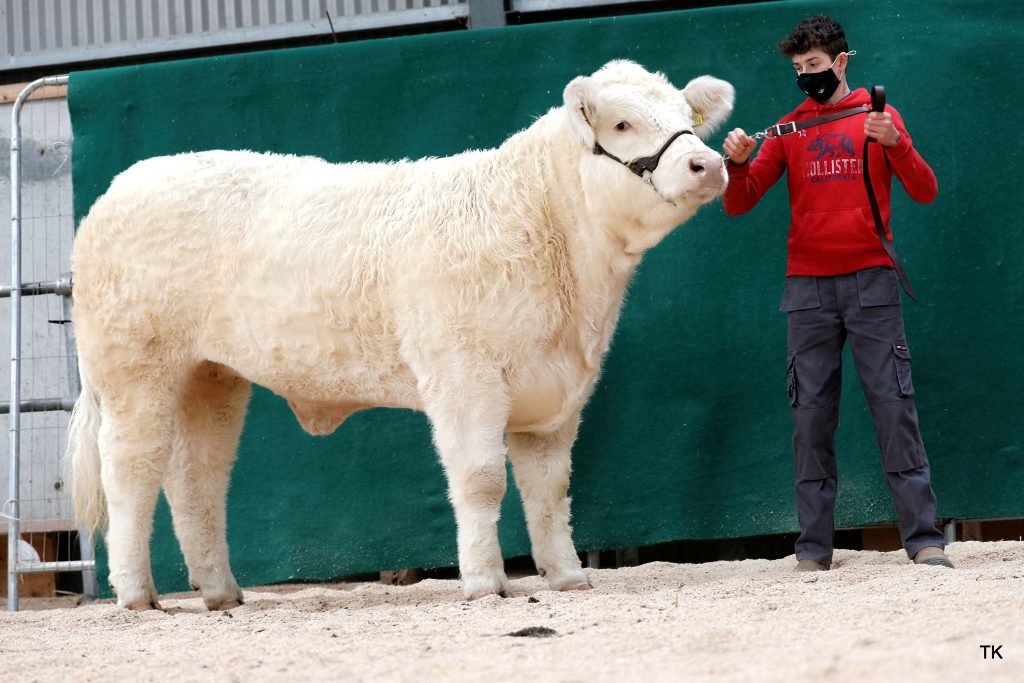 Paul Sheridan had a very successful day with his sale entries as he also went on to sell Farmer Polly (et) for a figure of €10,200. Polly is also sired by Aimable and is a full sister to Ballymorrishill Prettypolly (et). Both Polly and Prettypolly were recorded for having one copy of the Q204X myostatin gene.

These stablemates are not going to be separated as they both head for their new home with a Northern Ireland breeder.

The Tipperary-based Goldstar herd, owned by Martin Ryan, also had a very successful day selling their five entries to an average of €8,760.

Goldstar Portia topped Martin’s lots and secured the second highest sale price of €12,200. This heifer was sired by Goldstar Ludwig and out of a home-bred dam, Goldstar Grace, who is sired by Jumper. Portia boasted a Replacement Index of €83 and sold for export to Northern Ireland. 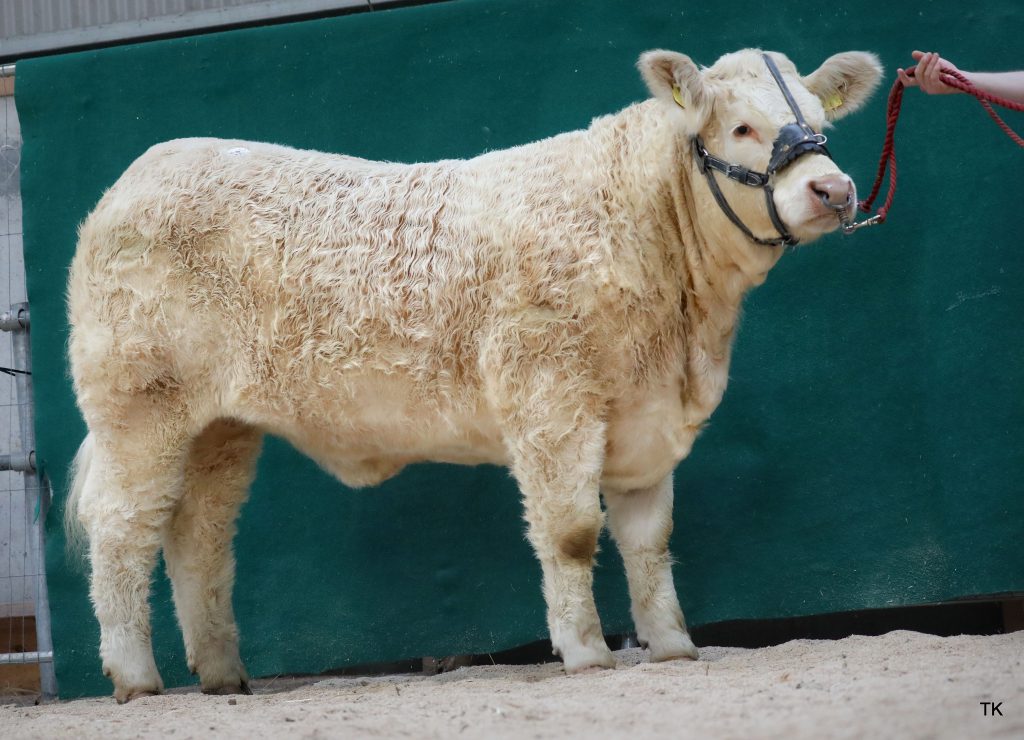 Next up to sell for €11,600 was Portia’s maternal sister, Goldstar Paula (et). This heifer was sired by Goldstar Echo, while her maternal grand-dam is Goldstar Edelwiss, who was a first-prize winner at the Tullamore Show in previous years. The purchaser this time was an Offaly-based breeder. 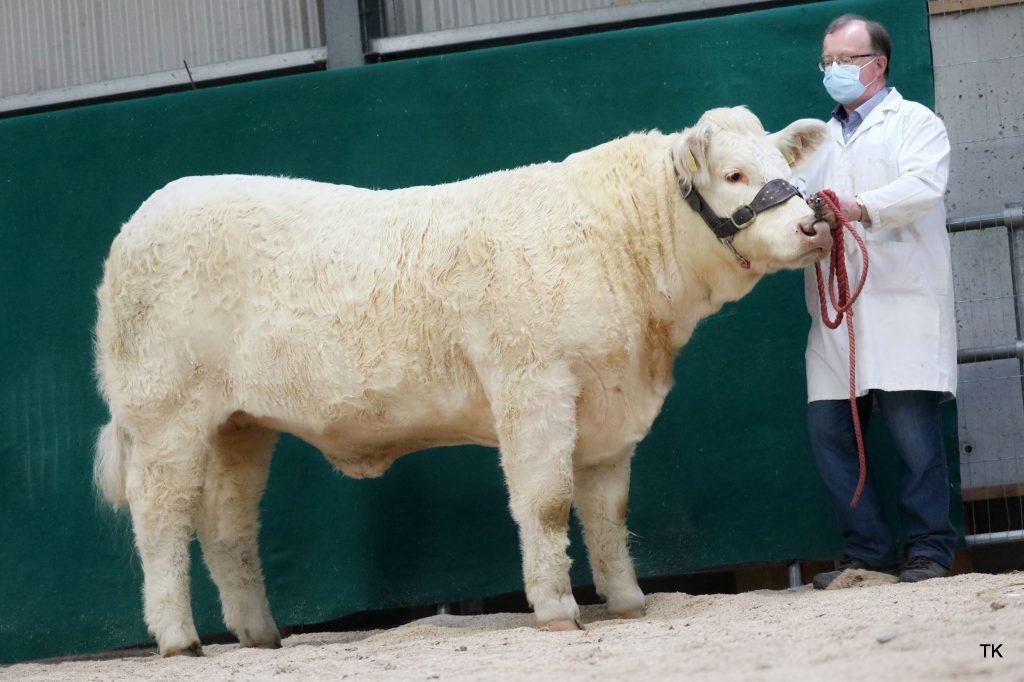 Liscally Pretty Polly 1 (et), exhibited by Jon Regan from Tawley in Co. Leitrim, sold for the next highest price of €8,500. Polly is sired by Domino and out of the imported UK dam, Maerdy Entry. Her maternal back pedigree also includes sires such as Padirac and Ecrin RJ. She sold to a breeder from Co. Tyrone. 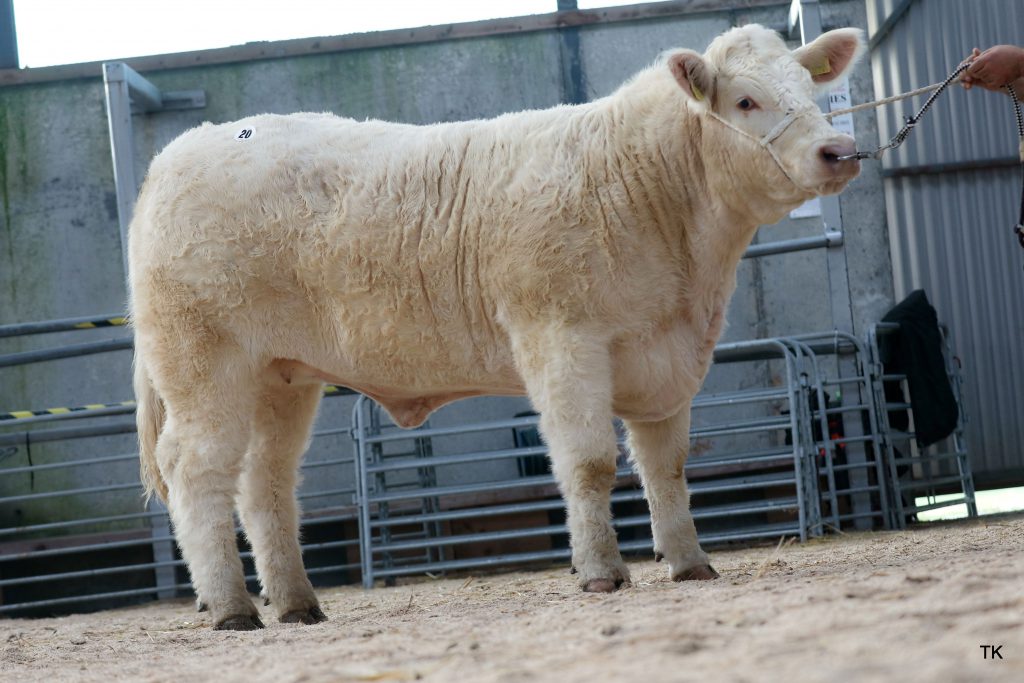 Goldstar Pearle (et), again exhibited by Martin Ryan, received a final call of €8,000. This heifer was sired by Goldstar Echo and out of home-bred dam sired by Tombapik. This heifer is heading across the border to a Northern Ireland breeder. 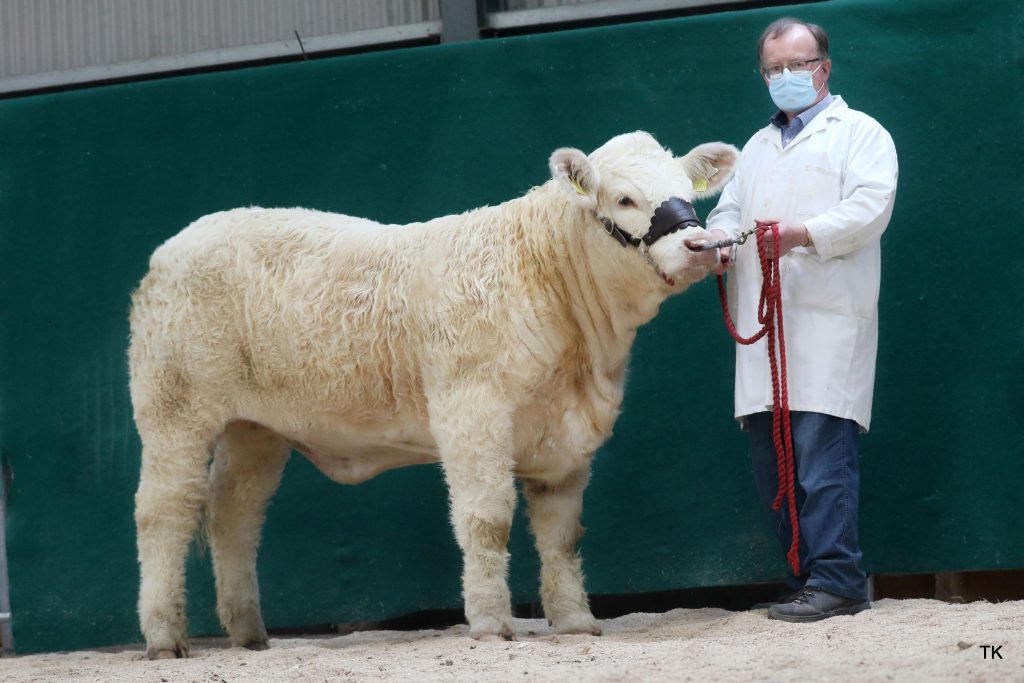 Pearle’s full sister, Goldstar Prada (et), was also a high achiever as she sold for €7,400 to a breeder from Co. Offaly. Both heifers shared a Replacement Index value of €68. Prada carries one copy of the Q204X myostatin gene, while her full sister carried no copies of either the F94L or Q204x myostatin.

This Goldstar Echo-sired heifer was exhibited again by Jon Regan from Co. Leitrim. Her maternal back pedigree included Balmyle Vagabond as her grand-sire and also the famous Liscally Blossom, who has been a very successful breeding cow for Jon’s herd. 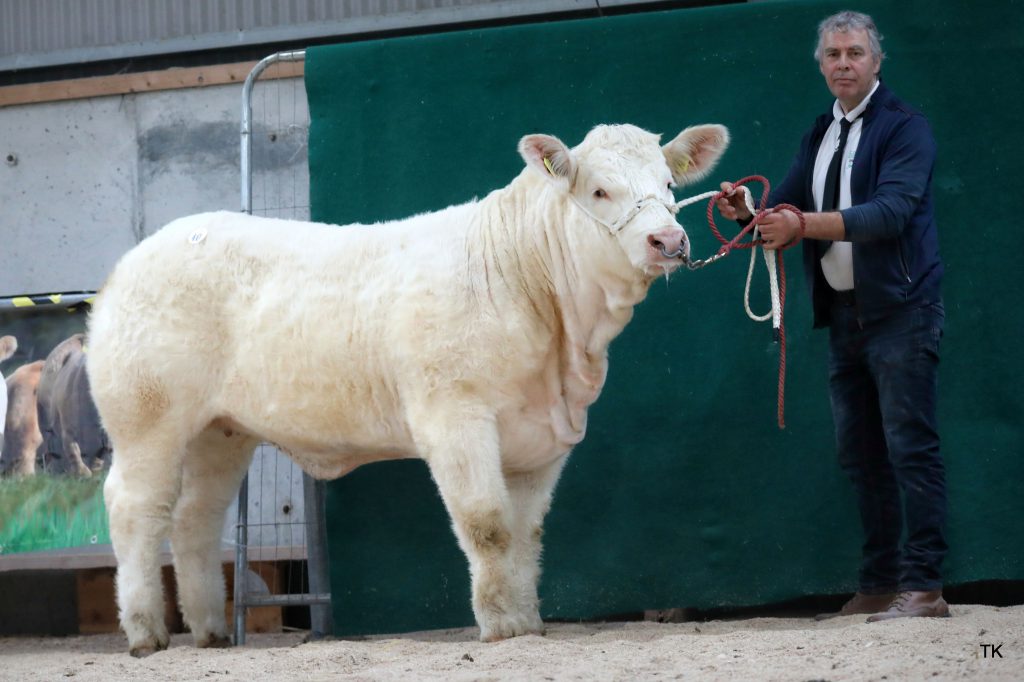 Gerard Lynch from Tulla in Co. Clare sold his sale entry, Knockmoyle10 Oonagh (et), for €7,100. This Pirate daughter is a full sister to the AI sire Knockmoyle10 Loki who currently stands in Dovea Genetics.

This heifer sold certified in-calf to Cavelands Fenian and carried two copies of the F94L myostatin gene. Oonagh is not going to be moving away too far from her home county, as she sold to a Limerick-based breeder.