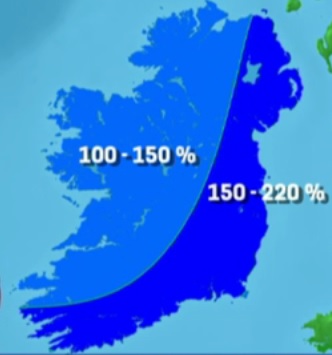 Weather will be unsettled and mixed as we go through this week with conditions likely to be worse in the east, according to latest forecasts from Met Eireann.

It says a band of persistent rain moving north eastwards across the country today (Monday). According to Met Eireann, the east of the country is likely to be hardest hit this week with over 200% of normal rainfall levels in places.

Met Eireann says after Monday’s rain clears away there will be spells of showers for Tuesday and Wednesday and then further spells of heavy rain at times in the second half of the week.

November, so far, has been a wet month with rainfall averages with above normal right across the country with amounts over 250% above normal in parts of the north midlands.

November follows on from a wet October. Met Eireann says monthly rainfall totals were above-average nearly everywhere in October with the exception of stations in coastal areas in the Northwest and West and in parts of the Midlands.

Percentage of Long-Term Average (LTA) values ranged from 81% at Gurteen to 161% at Johnstown Castle, which recorded it wettest October since 2002. Fermoy (Moore Park) reported 135% of its LTA with 153.6 mm and its wettest October in 10 years.

Met Eireann says the wettest days were mainly October 3, 5 and 28, with the month’s highest daily rainfall reported on October 5 at Cork Airport with 38.6 mm, its wettest October day in five years.

Mullingar reported its wettest October day in 12 years on October 28 with 26.4 mm. The number of wet days (days with 1 mm or more rainfall) ranged from 12 at Casement Aerodrome to 24 at Valentia Observatory and Claremorris, with Claremorris reporting its highest number of October wet days since 1973.