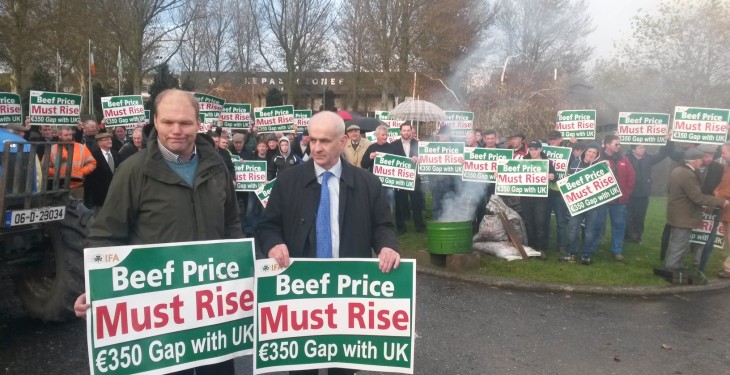 The IFA’s 48-hour protest outside meat factories started today (Sunday) at 3pm as planned, after talks broke down between the IFA and Meat Industry Ireland (MII).

However, MII, which represents the processors, condemned the move by the IFA and said it was ‘unacceptable’ and ‘irresponsible’.

It said that Friday’s discussions between the two bodies had seen significant progress being made in relation to many of the issues brought to the table by the IFA, but its move to go ahead with the protest showed that the IFA was not building on this progress.

It also said that the 48-hour protest would disrupt business and damage Ireland’s reputation with customers. MII said that the IFA is using “inappropriate and misleading price comparators when talking about the UK market”. It pointed to the Dowling report which said that R3 steer price comparisons are inappropriate.

IFA President Eddie Downey said the beef processors have to take responsibility for a €350 price gap between British and Irish beef. “Even with incontrovertible market evidence that shows how the UK price has moved on by 30c/kg in recent months, they have continued to deny farmers a return that reflects improved market conditions.

“Farmers cannot continue to sell cattle at a loss. Teagasc figures show that on our most efficient farms, producers need a base price of at least €4.00/kg.”

Unlike the recent 24-hour protest, the 48-hour protest is only targeting the big three processors: Kepak, ABP and Dawn Meats.