Pre-emergence is the best way to control grass weeds in winter cereals. However, it’s not always practical to achieve as growers focus on planting while the weather allows.

However, this week’s rain has put a stop to planting for most and those who have sowed may move the sprayer where ground conditions are suitable. Spraying autumn herbicides onto damp ground also helps with their efficacy.

If it is the case that pre-emergence cannot be applied, early post-emergence application should be used where possible.

Early application should give better control of problem weeds such as annual meadow grass or sterile brome. However, it is important to avoid application when the plant is coming through the soil and apply a pre-emergence spray where possible.

Whatever the timing, the main herbicide options available to growers remain much the same and contain active ingredients such as pendimethalin, flufenacet, prosulfocarb, chlorotoluron and diflufenican (DFF).

Growers should carefully consider the weed spectrum on their farm.

However, where growers have a brome problem they should try and avoid planting winter barley as more options are available for control in winter wheat.

Rotation is an important part of grass weed control and should be used as a tool to control a grass weed problem. For example, where black-grass is an issue a non-cereal crop should be planted. Planting in spring also reduces black-grass populations significantly.

Farmers with a brome problem should have flufenacet in the mix. On barley the rate of flufenacet should be high and may need two applications of a product like Firebird.

Those with a brome problem in winter wheat have more options and also have the option to come back with Broadway Star (needs temperatures of 8°) in the spring time, but the first herbicide application for control of brome should take place pre-emergence or early post-emergence.

Tri-allate has also come back onto the market this season. The product (Avadex Factor), which can be used on winter wheat and winter barley, is known for its ability to control wild oats, but also offers some control of black-grass and brome and can add strength to a flufenacet or pendimethalin based herbicide programme.

Growers must also note that oats cannot be planted in a field where Avadex Factor was used until 12 months after its application.

Another option where grass weeds are becoming an issue is to apply a second application of herbicide to the headlands if there is evidence of grass weeds later in the season, as the problem may be spreading from the headlands to the field. This is of course only where rates and labels allow.

However, cultural control is the first line of defence and all other options should be used to reduce dependence on herbicides.

It’s too late for some farmers to take the next option, but delaying drilling can also help to reduce grass weed problems. The chart below from Teagasc describes the germination rate of grass weeds at different times of the year.

If you look at sterile brome for example, it emerges from July to November, so delaying drilling of winter barley until October will reduce populations and where wheat can be delayed until November it can help to reduce plant populations significantly. 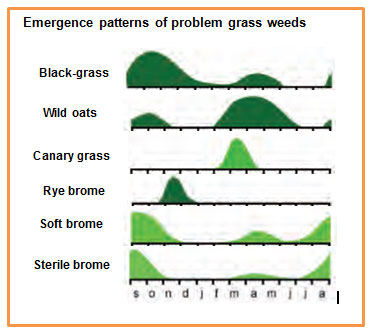 There are loads of grass weed control options out there, so just make sure you apply the most suitable to your weed spectrum.