€33m expansion for Dairygold in Cork 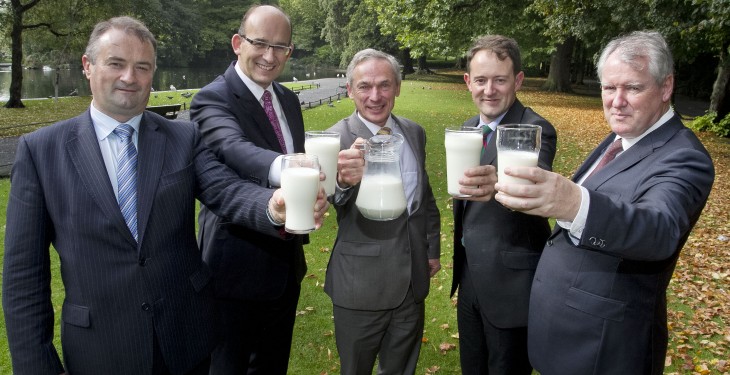 Dairygold Co-op is to invest €33m in expanded facilities in Mitchelstown, Cork. The Minister for Jobs, Enterprise and Innovation, Richard Bruton TD, together with the Minister of State for Research and Innovation, Sean Sherlock  have announced government support for the venture through Enterprise Ireland.

The investment will incorporate an expansion and upgrade of the co-op’s milk processing facilities at the Mitchelstown plant. It is hoped 100 jobs will be created in the construction, installation and commissioning phases of the new processing operation. In addition, it is expected the project will also give rise to sustained employment at the Castlefarm site in Mitchelstown.

The proposed investment will establish a new six tonne/hour multi-purpose milk drying facility and a variety of infrastructure and plant enhancements. Dairygold say it will increase its overall peak processing capacity and represents the conclusion of phase one of the society’s processing capacity plan to 2020.

According to Dairygold, the facility when completed will be the Irish dairy industry’s first post quota infrastructure to become operational with commissioning scheduled for next year’s peak milk season. All produce from the new facility will be destined for export markets.

Making the announcement Minister Bruton said: “The food sector is a central part of the Government’s Action Plan for Jobs and over recent years we have seen substantial growth in exports and jobs in this sector. The targets we have set cannot be achieved without innovative, dynamic Irish companies such as Dairygold, companies that represent the future of Irish food exports.  I commend Dairygold on its achievement and wish them every success.”

Minister Sherlock said:  “This €33m processing expansion is great news for Cork and the wider Munster area. Dairygold is a highly innovative company and an important employer in the region. Dairygold clearly recognises that innovation is the driving force for future growth and this investment is a clear vote of confidence in the continued growth of the dairy/food sector in Ireland.”

Speaking about the investment, Dairygold chief executive Jim Woulfe said: “This is the first phase in our post 2015 expansion programme. This investment is more than processing expansion it also improves the energy saving and environmental performance of our Castlefarm operation and builds on the commissioning of the Anerobic Digester effluent plant we commissioned there in 2012 This new facility will provide multi-product processing capability allowing expansion in the supply of a variety of higher value dairy ingredients including those that complement our ambitions for expansion in the Infant Formulae Sector.