Red tape and poor prospects for the region’s farming future has pushed a Dungiven farmer and his family to start a new life in Canada.

Andrew Evans has farmed with his family at the foot the Sperrins in the north-west all his life, but decided to call it a day and make the move across the Atlantic as he says he is “fed up” with working conditions here.

Speaking to AgriLand, Evans said he already has a few farms in mind, but will only be able to make a final decision once he sells of the majority of his assets over here; but he knows one thing for sure – he won’t be going back into dairy.

“The joke is that my wife won’t let me, but nobody appreciates the commitment there is with dairy – you’re talking 365 mornings in every year,” he said.

A future in Canada

Evans is helped by his two sons, who he hopes will one day take over the new farm.

Whilst in Canada, he hopes to go into a mixture of arable and beef farming – but is still weighing up his options. Last week, the 140 milkers and 50 drystock were put through the auction-ring and tomorrow 180 lots of machinery are set to go under the hammer on the farm on the Curragh Road at 10:30am.

Star lots include a 28ft cattle trailer, a 15m³ diet feeder and an 18t dump trailer.

Farming video channel Grassmen joined Evans on the farm as the cows were loaded up; more footage is expected to be added to the channel soon.

Thinking of the future and his sons also played a big part in the decision – but a general lack of prospects for farming and weariness of ever-tightening regulations finally made Evans’ mind.

“There’s lots of reasons for it, but one of the main reasons was that I’m just fed up with our politicians here, our Department of Agriculture, and the weather, and the prices – everything’s getting harder every year,” he said.

“I want to see what I make here first [before buying a farm in Canada]. I have my eye on a few places and I hope to go out in a couple of week’s time to put an offer on one, but I’ve nothing bought yet.

If the farm was sold, I would know what I could spend.

Evans said he had some first-cut silage left, which could help out someone in need.

The 117ac farm is currently on the market for £1.6 million and is split across six lots. The main yard includes an 18-point swing-over parlour and an 11,000L bulk tank.

A 10-year-old portal frame dairy shed that is 240ft long and 120ft wide with LED lights, a scraper system and three calving pens is also part of the farm.

Several prospective buyers are already said to be interested. 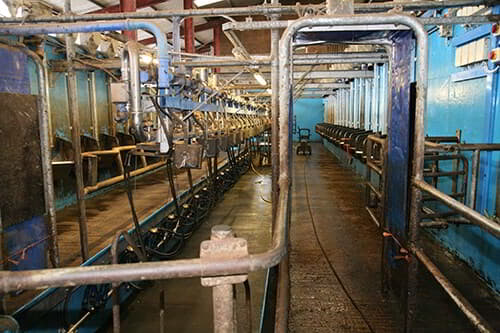 The land is made up of around 55ac of good arable ground and a further is 63ac of good green stony mountain suitable for dry stock or sheep.

“I’ve never lost anything off a farm payment, but it’s only going to get worse here; in Northern Ireland, I am convinced we are the heaviest policed farming industry in Europe,” Evans said. Fodder in the North: ‘Not a crisis – but it’s not far off one’