The weather for the final day of the Balmoral Show looks set to be mostly dry but it will feel a bit cooler with northerly winds.

The Met Office has forecast for some good early brighter spells, but it will turn cloudier from mid-morning. Maximum temperatures will hit 18 degrees.

There has been good weather for the first two days of the event, with temperatures hitting nearly 20 degrees yesterday.

For the rest of the weekend in the North, temperatures are expected to be around the seasonal averages. The best of the brighter spells will be on Saturday.

Otherwise it is expected to be rather cloudy but dry with light to moderate west to northwest breezes.

Yesterday, day two of the show, saw great sunshine. Conor Macauley tweeted this great shot of the sheep enclosure with some of the sheep just shorn from the shearing pavilion.

Are you guys nuts. You don't need a coat that day. #BalmoralShow pic.twitter.com/cUsa0RxSHL 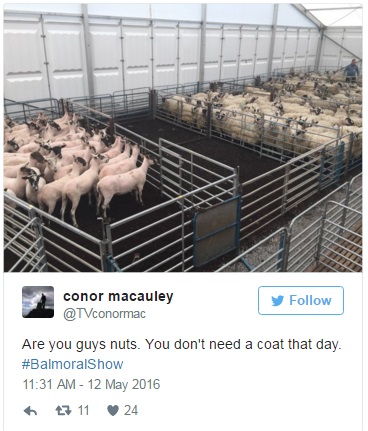 There was plenty of happy cows at the Lely robotic milking stand and Miriam the Cow was tweeting yesterday. 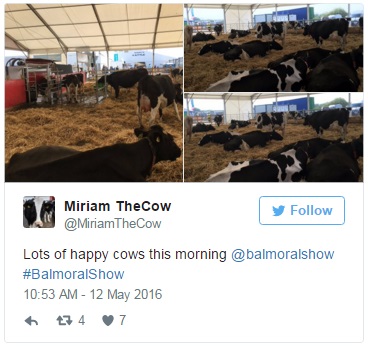 Along with the sunshine and there was plenty of traffic into the show as Ruth Maxwell found out with this tweet.

Quite literally in a 3 mile queue into Balmoral. #BalmoralShow

Another Twitter user by the name of TomBoyNI tweeted that Lisburn couldn’t handle the traffic to the show.

#BalmoralShow traffic is a disaster. Good luck and God speed to anyone even considering it. #Lisburn can't handle it – simple. 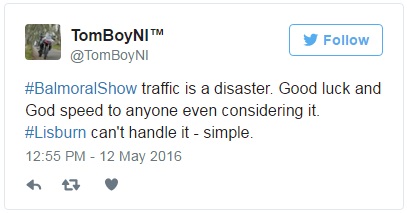