A long, drawn-out mini reform of the Common Agricultural Policy (CAP) is not in the interests of Irish farmers and must be avoided, according to Fianna Fáil MEP Billy Kelleher.

This is particularly the case if it is caused by a failure to agree on the new CAP budget and delays in the negotiations on the new CAP reform, the MEP added.

Kelleher, a member of the centrist Renew Europe Group, was commenting as work begins in the European Parliament on the transitional CAP legislation needed to bridge the gap between the old CAP and the new model.

“A key part of the delay in delivering a new CAP is down to the failure of EU member states to agree the Multi-Annual Financial Framework (MFF), which underpins the CAP budget,” Kelleher said.

“Obviously, if the new CAP cannot now start on time, the existing funding levels should be rolled over and maintained. That is a no-brainer. However, there cannot be any delay in getting the new CAP in place.

“The ball is in the court of EU member states, including Ireland, when it comes to agreeing the MFF,” he said.

Continuing, the MEP noted that, while Brexit is still up in the air causing uncertainty, once the UK’s departure is finalised, all countries “must move quickly to allow agreement on the MFF and the CAP”.

Irish farmers need stability and predictability when it comes to their future incomes. No one wants to see a long, drawn out transition between the old and new CAP programmes – it would be in no one’s interests.

“A robust CAP budget fit for the 21st century is desperately needed to safeguard small family farms and protect our planet.

“Fianna Fáil is clear that this must be the priority. I will work with my colleagues in the Renew Europe Group, and in particular, the members of the AGRI committee to ensure that the EU focuses on this core priority,” Kelleher concluded. 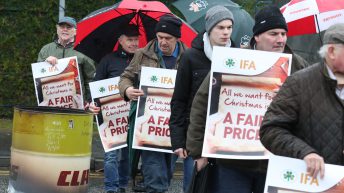