Feed use per cow on Irish dairy farms increased this year despite lower milk prices, according to Teagasc.

It says that purchased feed (concentrates) is an important element of dairy production costs in Ireland, typically accounting for about 20% of total input expenditure, although this varies by farm and by year.

While official feed sales data for the full year are not yet available, Teagasc says its data provides evidence of an upward trend in feed use per cow in 2015.

In its Review and Outlook document for 2016 Teagasc said weather conditions in 2015 have been generally favourable for grass growth, which suggests that the increase in feed use may be attributable to the removal of the milk quota and subsequent increase in milk yields. 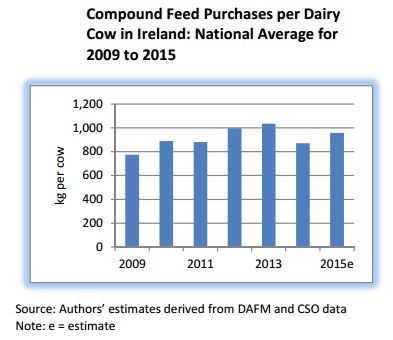 Teagasc says the average milk yield per cow is estimated to have increased by 5% in 2015 relative to
2014.

It says for the average dairy farm, expanding production by 10%, feed use per cow is likely to be 5% higher in volume terms than in 2014.

Weather conditions globally for cereal and other grain producers have been quite good in 2013, and 2014.

A succession of good harvests has led to a rebuilding of global cereal stocks and generally lower international cereal prices.

Conditions were again quite good in 2015, further contributing to the recovery in stock levels and leading to lower grain prices.

Teagasc says these grain price reductions were eventually transmitted to the Irish feed market, leaving feed prices at a lower level in 2015 than in 2014.

Teagasc says this decrease in feed prices in 2015, combined with an estimated 10% increase in dairy aggregate dairy feed use, suggests that total expenditure on dairy feed in 2015 increased by 3% on the level recorded in 2014.

However, Teagasc says it should be noted that this additional expenditure was supporting higher production levels. This means that on a per litre basis the expenditure on feed has actually declined by 6%.