‘Department is not in the business of shooting cattle’ – Minister 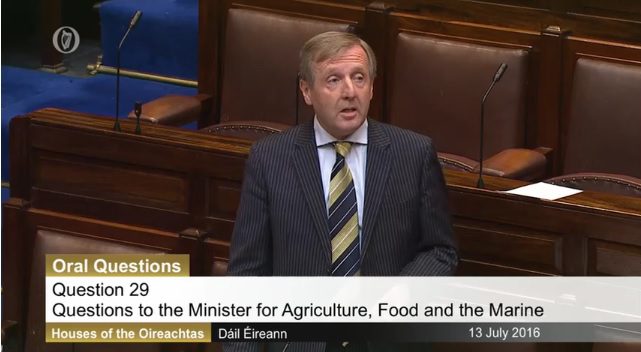 The Minister for Agriculture, Michael Creed has made his first comments in the Dail in relation to last week’s incident in Monaghan which saw the Defence Forces cull five cattle on a Co. Monaghan farm.

Responding to questioning from a number of Deputies on the matter, Minister Creed stressed that his Department is not in ‘the business of shooting cattle’ and said that in any circumstances it is the ‘last thing we want to be at’.

The Official Assignee, appointed to recover value from assets following the bankruptcy of the Co. Monaghan farmer, cited ‘security issues’ as the reason behind the shooting of five animals on the farm last week.

Speaking about the background to the incident the Minister said that there is an ‘awful lot more to this case than meets the eye’ and stressed that the actions taken were necessary.

The Minister said the consultation involved the Departments Veterinary office in Cavan and said the Gardai were also involved.

“There was a number of efforts made to deal with these animals, I understand on at least four occasions efforts were made to round up these cattle unsuccessfully.

“On other occasions when locks on gates were tampered with and cattle were on the public road which is very near the Carrickmacross Dundalk road.”

The Minister said there was a concern because of what he described as ‘incidents’, for the ability of the Assignee to manage the herd.

He said there was a real concern for ‘public safety’.

“I appreciate that it’s not a sight that anybody wants to behold in terms of the outcome. But what would have been the alternative?

“If these cattle on the public roadway cause a serious or fatal accident my department would equally be in the dock.

“As far as i can see this was a no win situation. This is a last resort for the Department,” he said.

Speaking in the Dáil today, Sinn Féin agriculture spokesman, Martin Kenny said farmers should be compensated if the Department did not comply with inspection regulations.

“This case went through the courts on June 2. The farmer in question lodged an appeal to the Department.  When officials came out to his farm, they did not fulfil the regulations set out by the Department and the EU.

“If the shoe was on the other foot and the farmer had not fulfilled the regulations, we know what would have happened. As the court said, this farmer has to be compensated for his losses because his appeal was not dealt with properly.”

He said that hundreds of other farmers are in a similar position and would be examining their positions and saying they too had a fair case which was not death with properly.