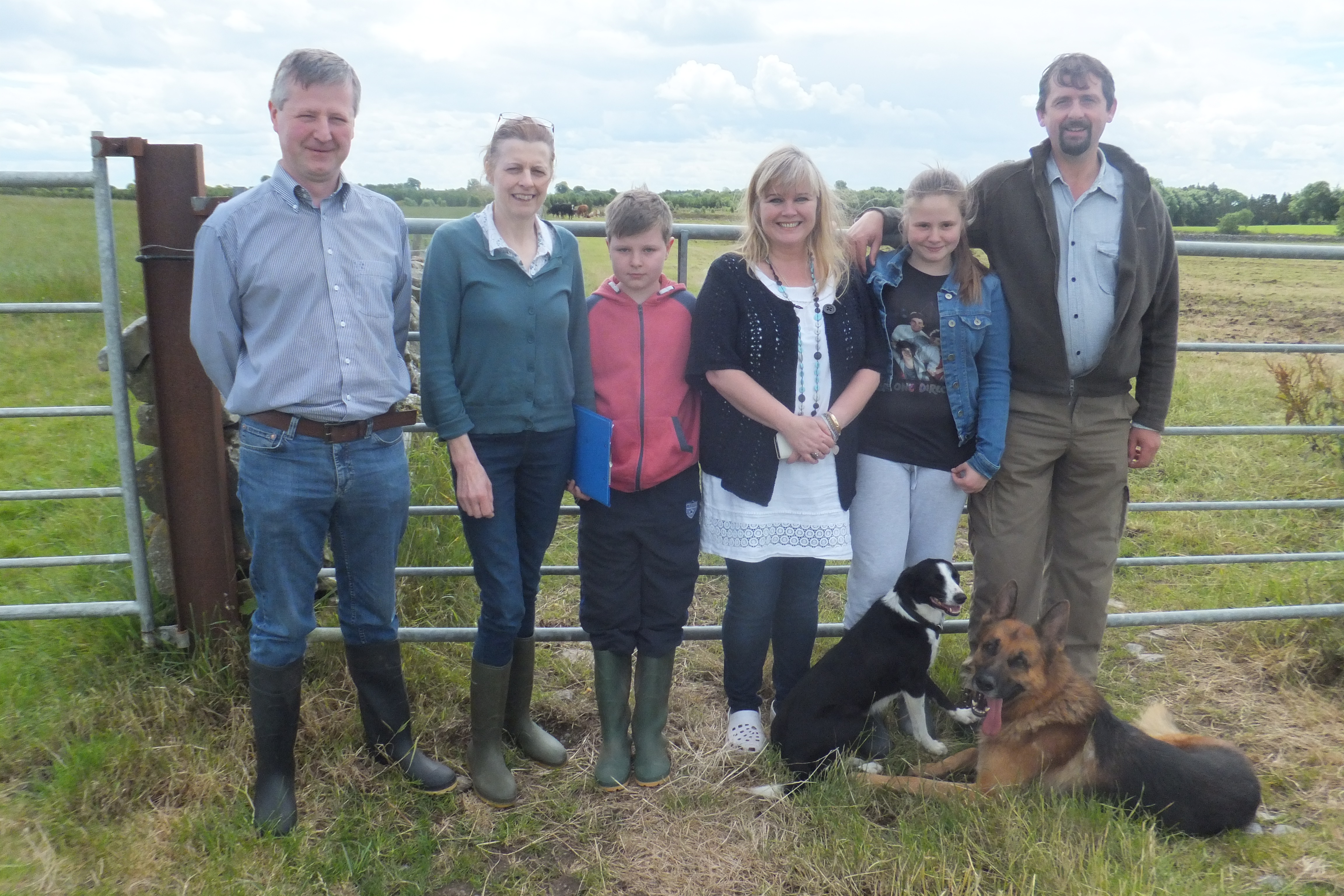 Teagasc advisors Austin Callaghan and Geraldine Hynes (left) join the Dixon family (Anna and Oliver along with children Daniel and Hazel) to discuss plans for the upcoming organic demonstration farm walk which will be held on the Dixon’s farm on Thursday, July 17, at 2pm.

These farm walks will highlight the opportunities which exist in the organic sector. Organised by Teagasc, in conjunction with the Department of Agriculture, Food, and the Marine, the first farm walk in this year’s series will take place on the farm of Oliver Dixon, Ahena, Calaremorris, Co. Mayo on Thursday, July 17, at 2pm.

According to Teagasc, organic farming can be a profitable system of farming with some of the most profitable farmers in the country farming organically. Maintaining high output levels, coupled with lower production costs and premium market prices contribute to higher margins. Earlier this month, in a show of commitment to growing the sector, Minister for Agriculture, Food and the Marine, Simon Coveney announced an increased budget of €44 million to be allocated to the new Organic Farming Scheme due to re-open in early 2015.

The EU market has quadrupled in size over the last 10 years and is now worth over €20 billion euro.
In Ireland, just over 1 percent of land is farmed organically, a doubling of area since 2000. There are in excess of 1,500 organic operators including 40 organic farmers in Co. Mayo. The majority of these (about two-thirds) are drystock farms.

Dan Clavin, Organic Specialist at Teagasc, Athenry said: “The series of farm walks are a great opportunity for conventional farmers to see the developments and innovations currently taking place on organic farms. For organic farmers, the walks also provide the opportunity for the sharing of information and experiences between producers in an open and informal manner”.

Oliver Dixon, Ahena, Calaremorris, Co. Mayo, operates an organic suckler to beef enterprise on 43 hectares. He started his organic conversion period which lasted two years, in 2010 and now finishes about 25 cattle per year all of which end up in the organic beef market. Price premiums of +15% to +20% have been available over conventional beef factory prices, over the past number of years. Commenting on the conversion to organics, Oliver said: “I went into organic mainly for financial reasons, but also because I had an interest in it. I wanted to cut down on my costs which were simply too high to justify the price I was getting for my cattle. Now I am making higher margins, mainly because of my lower costs and higher prices which I now get for my cattle.”

Oliver has placed a lot of emphasis on maintaining productivity on the farm by sowing clover, judicial use of slurry and manures from both his own farm and imported, and selecting quality breeding stock which suit his own system. “Clover is the main driver of production on my farm,” said Oliver. “Since I started to sow clover, I find that I can grow plenty of cheap, quality grass without the cost of artificial nitrogen. This year I plan to sow some red clover which will help to provide even more quality silage for finishing more cattle.”

Oliver Dixon, along with representatives from Teagasc, the Organic Certification Bodies and Department of Agriculture, Food and the Marine, will be on hand on the day for questions. Farmers, and their families, along with members of the public are welcome to attend. This is a Beef Technology Adoption Programme (BTAP) approved event. Admission is free of charge.