Demand for lambs weakens as supplies jump 50% in 3 weeks

Lamb prices have slumped by as much as €15 per head in the last two weeks as supplies to processors continue to increase.

According to figures from the Department of Agriculture supplies of lambs were up by more than 50% in the last three weeks.

Latest reports suggest that factory quotes for lambs have fallen to €4.50c/kg for this week. The sheep trade has eased further in recent days on the back of those strong supplies and poor demand, according to Bord Bia.

It says the trade was also reported as slow across our key export markets. In the UK lamb prices have fallen to a five year low.

Last week base quotes for spring lamb were generally making between €4.80/kg and €4.90/kg last week with selected lots achieving higher prices while prices paid for culled ewes were making around €2.80/kg. 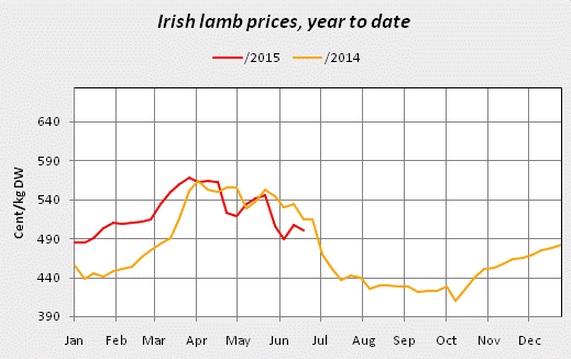 Supplies at sheep export meat plants for the week ending June 20 stood at around 61,000 head which was up about 8% on the corresponding week in 2014.

Cumulative supplies for the year to date are currently down 1% on year previous levels standing at 1.06 million head.

In Britain, Bord Bia says little change was reported in the trade with supplies still strong. The SQQ live price for lamb in England and Wales was making the equivalent of around €5.03/kg towards the end of the week.

In France, demand was reported as slow this week due to the end of the school year and the start of the holiday season with demand from Ramadan not as high as expected.

Promotions were centred mainly on halal forequarter lamb. The price for Grade 1 Irish lamb was making €5.30kg (DW incl VAT) in the early part of the week.