Eligible dairy farmers in Northern Ireland have less than a week to apply for the EU Exceptional Adjustment Aid (EAA) package, with the deadline for applications closing on Wednesday, May 31.

The ‘small dairy farmers’ scheme requires an application form to be completed from the Rural Payments Agency website.

To be eligible, dairy farmers must have had an annual cows’ milk production of less than one million litres, between April 1, 2015 and March 31, 2016, and must still be in milk production. Payments will be made on a per-litre basis, up to a cap of 500,000L.

The Department of Agriculture, Environment and Rural Affairs (DAERA) previously announced that it would focus approximately £1.5 million, out of Northern Ireland’s £4.1 million allocation of the EU EAA, on small dairy farmers.

The rate of payment to farmers will not be known until all applications for the scheme have been received and the remaining funds leftover from the aid package are calculated.

However, the Ulster Farmers’ Union (UFU) has expressed concern that some farmers may have had their expectations raised after the circulation of unconfirmed figures in relation to the total under-spend of the EAA and how much would be paid to each eligible farmer.

Sadly, some individuals are ‘jumping the gun’ and spreading unconfirmed figures. DAERA has said it has £1.5 million unspent, but until all the applications are processed, any figure for a final rate of payment to farmers is speculation.

“We don’t want to see farmers disappointed and would encourage them to be mindful of this when they are making an application,” UFU President Barclay Bell said.

The union believes DAERA could have delivered wider benefits across the industry if it had chosen to consult with it and other stakeholders on the unspent funds.

And although the UFU accepts the decision was taken to avoid funds being lost back to Brussels, it believes this was a “missed opportunity” on DAERA’s part.

“The decision has been taken and we must move forward. I would encourage any dairy farmer that is eligible to ensure they get their application in by May 31,” Bell said. 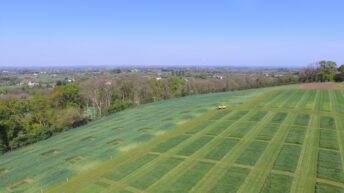 More From Grass event is a ‘must-attend opportunity’