Dawn Meats has agreed a strategic partnership with Dunbia to establish a majority-owned joint venture in the UK; which will comprise of the UK operations of both organisations.

In the Republic of Ireland, Dawn Meats will separately acquire Dunbia’s operations. The deal is subject to approval by the relevant competition authorities.

If this deal receives the green light, Dawn Meats will have nine facilities – including five abattoirs – in the Republic of Ireland.

This will follow the addition of two complementary Dunbia facilities; one abattoir in Slane, Co. Meath, and one boning hall in Kilbeggan, Co. Westmeath.

It is expected that the combined UK businesses will trade as Dunbia. It is hoped it will deliver enhanced scale and market presence, in order to better serve existing farmer suppliers and customers of both organisations across the retail, manufacturing, wholesale and food-service sectors.

The new joint venture is set to offer customers regionally-sourced solutions for both beef and lamb, from 15 facilities across Scotland, England, Wales and Northern Ireland.

The new joint venture will be run from Dunbia’s existing headquarters in Dungannon, Co. Tyrone.

Family businesses with a deep connection to farming

Both Dawn Meats and Dunbia are family businesses with a deep connection to farming, Dawn Meats’ CEO, Niall Browne, said.

“Given the uncertainty posed by Brexit, this partnership should further underpin the competitiveness of both operations to the benefit of all stakeholders in the UK, Ireland and across Europe.

We are very excited about the future of both companies and the opportunities that this transaction will bring for our staff, customers and suppliers.

“In our key operating markets we will be involved in three leading national businesses; Dawn Meats in Ireland, Dunbia in the UK and Elivia in France, with our co-operative partners Terrena,” Browne said.

Meanwhile, Jim Dobson, the CEO of Dunbia, believes this deal is the right strategic partnership for Dunbia’s staff and customers.

It sees Dunbia joining with a company with a shared heritage of excellence in the production of premium beef and lamb products, he added.

The new UK joint venture confirms our future as a leading supplier in the UK market.

“In a consolidating industry this deal makes strategic sense for both companies, our customers and our farmer suppliers,” he said.

Across Dawn Meats and Dunbia, the businesses process approximately 900,000 head of cattle and 2.6 million sheep annually.

Dawn Meats is a supplier of Irish and British red meat to a range of leading supermarket, food-service and restaurant businesses in Ireland and the UK; it is exporting to 48 countries around the world.

It is also a 49% shareholder in Elivia – the number two beef processor in France – which processes approximately 500,000 head of cattle annually.

Dunbia is a leading processor of beef and lamb with nine sites located across the UK and Ireland; it employs around 4,000 people.

The company is one of Northern Ireland’s largest privately-owned companies and currently exports to 36 countries worldwide. 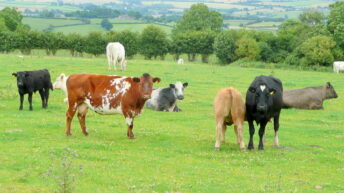 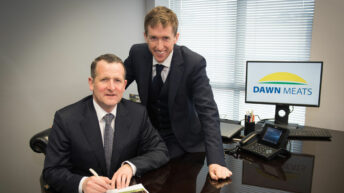