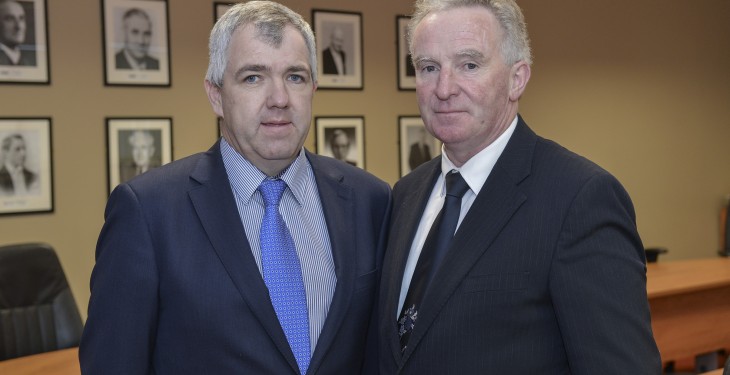 In its first meeting of 2015 the Board of Dairygold Co-Operative Society elected a new Chairman, James Lynch a dairy farmer from Sixmilebridge, Co. Clare.

He was first elected to the Dairygold Board in 2008 and has served as the Society’s Vice Chairman. His farm was among the first of Dairygold’s Monitor Farms. It was to the James’ farm that China’s current Premier, Xi Jinping, paid a visit during his three-day tour of Ireland in February 2012.

Mr Lynch replaces the outgoing Chairman Bertie O’Leary who retired in December having served his full term on the Dairygold Board.

Board member Tom Feeney from Ballyheaphy, Araglen in Cork was elected Vice Chairman. Tom was elected to the Board in 2009.

The new Chairman takes over as Dairygold’s new facilities at its Castlefarm site in Mitchelstown, Cork, gear up.

The Castlefarm investment represents Phase One of Dairygold’s post quota expansion plan. Phase Two of the plan will see work begin in quarter three this year at its brownfield site in Mallow to establish new state-of-the-art milk drying facilities to produce the full range of milk powders up to and including IMF.