The sixth Global Dairy Trade auction of the year has posted a drop in dairy product prices of 2.9%.

This fall comes after dairy product prices rose 1.4% on March 1 for the first time this year.

New Zealand bank ASB had suggested that the Global Dairy Trade would rise by between 1 and 5%.

It also hinted that Whole Milk Powder (WMP) could be up by as much as 7% however, the latest auction showed WMP prices to be down by 0.8%.

Rennet Casein posted the lowest decrease (-7.0%) followed by Anhydrous Milk Fat (AMF) which was down by 6.5%. 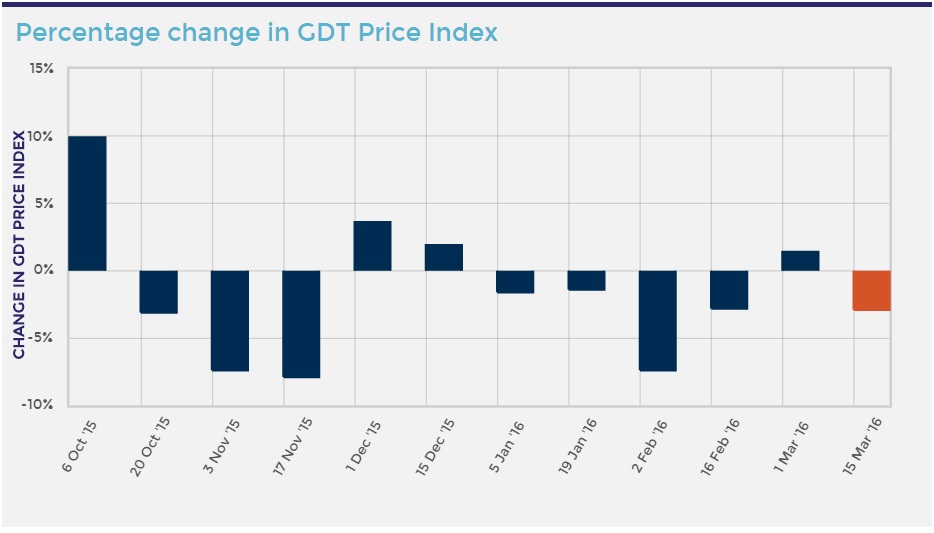 Meanwhile, a new report by the European Commission has said that the increase in world milk supply is not only due to the ending of milk quotas in the EU.

The European Commissions latest Short Term Outlook for Dairy found that between 2007 and 2015, EU production increased by 10% or 15m tonnes.

Furthermore, close to 40% of the EU’s increase in milk production took place in 2014, which the Commission’s outlook attributes to very good milk prices in 2013/2014.

Moving to 2015 and countries such as Ireland and the Netherlands, which were previously limited by quota, saw faster production growth.

Milk Market Observatory figures show that EU milk deliveries increased by more than 2%, and this despite the decrease in milk prices paid to farmers.

Deliveries were 5% higher deliveries during the last quarter of 2015 compared to 2014, which the outlook found was due to extremely mild autumn weather and cows being fed on grass much longer than 2014.