Total income from farming in Northern Ireland increased by 33.7 per cent (31 per cent in real terms) from £223m sterling in 2012 to £298m sterling in 2013 and this drive is down to huge increases in the dairy sector.

This is according to Department of Agriculture and Rural Development (DARD), which has published the provisional figures for farm incomes in 2013 this morning. The income represents the return on own labour, management input and own capital invested for all those with an entrepreneurial involvement in farming. It represents farm income measured at the sector level.

Total gross output for agriculture in Northern Ireland rose by 10 per cent in 2013 to £1.9bn sterling, it said.

Statistics released by DARD also notes that the output value of cattle increased in 2013 by 6.5 per cent to £440m sterling.

DARD also notes there were gains in the values of output in the intensive livestock enterprises, with increases of 14 per cent (to £132m sterling), 6.8 per cent (to £257m sterling) and 2.2 per cent (to £67m sterling) in the pig, poultry and egg sectors, respectively. For the pig and poultry sectors, this was due to increases in both production volumes and prices. The volume of eggs produced increased but this was partially offset by a reduction in egg prices.”

The output value for field crops increased in 2013 by 7.9 per cent to £77m sterling, according to DARD.

“This was mainly as a result of better weather leading to a rise in harvestable potato production, which increased the value of the output of potatoes in 2013 by 27 per cent to £25m sterling.

DARD said the estimated value of the 2013 single farm payment was £259m sterling, representing a rise of 5.9 per cent compared with 2012. This increase is due mostly to the fact that voluntary modulation was not applied in 2013, it noted.

In terms of total gross input, DARD notes this increased by 9 per cent in 2013 to £1.5b sterling.

“Feedstuff costs, which accounted for 54 per cent of the gross input estimate, increased by 11 per cent to £800m sterling in 2013. There was a 5 per cent rise in the volume of compound feedstuff purchased and a 7.5 per cent rise in the average price paid per tonne.”
In 2013, the total cost of fertiliser (including lime) rose by 22 per cent to £101m sterling as a result of a 24 per cent increase in the volume purchased, which was partially offset by a 1.4 per cent reduction in the average price, DARD notes.

DARD also found that total machinery expenses increased by 1.1 per cent to £153m sterling in 2013. “The increase was due to a 3.5 per cent rise in machinery repair costs, though this was partially offset by a 0.5 per cnet reduction in the cost of fuel and oils.” 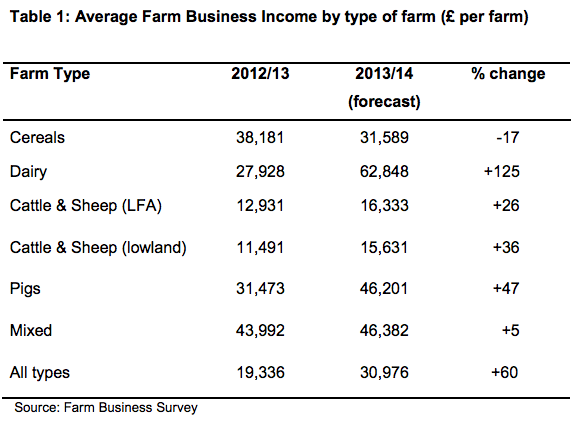 At the individual farm type level, the DARD results show that Farm Business Income is expected to increase between 2012/13 and 2013/14 on Dairy, Cattle and Sheep (LFA), Cattle and Sheep (Lowland), Pigs and Mixed farms. For these farms, the increase in incomes results from higher product prices in the 2013/14 accounting year, it said.

The results also show that Cereals farms are the only farm type expected to show a fall in Farm Business Income for 2013/14 when compared with the previous year. The downturn in incomes for Cereal farms is mainly the result of lower grain prices in the 2013/14 accounting year, it added.

A detailed analysis of farm incomes by type and size of farm will be provided in the report ‘Farm Incomes in Northern Ireland 2012/13’ that will be published by DARD this March.