It is all go down in Gurteen Agricultural College, between getting prepared for Grass and Muck 2020 along with settling in to its impressive range of new facilities on the farm.

This week, AgriLand paid a visit to the farm to check out what is going on to get ready for the Grass and Muck event which is expected to host between 130 and 140 exhibitors and over 12,000 visitors this year; in addition to checking out their brand new cubicle shed and 30-unit DeLaval parlour.

The event – which is due to take place on May 14 and organised by the Farm Tractor and Machinery Trade Association (FTMTA) – takes up a sizable proportion of the farm’s dairy block.

Commenting on the preparations for the day, farm manager Ken Flynn said: “At the moment, we are trying to graze off all of our silage ground, to close it up at the end of next week for the event.

A lot of the area for the event is on our dairy block, so when it is closed up for silage, we have a lot of swapping around and moving to keep grass in front of our cows.

“FTMTA loans us a zero-grazer to help us get in some of the grass, which would otherwise be cut for silage, but is used for the event instead. This would usually be fed as a buffer after milking before they go out to the paddock.

“If it’s good year for grass growth, grass and muck doesn’t upset us that much,” he added.

The total area to be designated for the event includes: 100ac for silage; 30ac for the main car park; and 15ac between an exhibitor and an over-flow car park.

The dairy herd itself – known as Gurtbelleen Herd – has undergone some significant changes over the past number of years.

Switching from a split-calving system, to completely spring-calving and expanding from 100 pedigree Holstein-Friesian cows pre-quota, up to 230 cows today. The plan is to build this up to 250 cows next year. 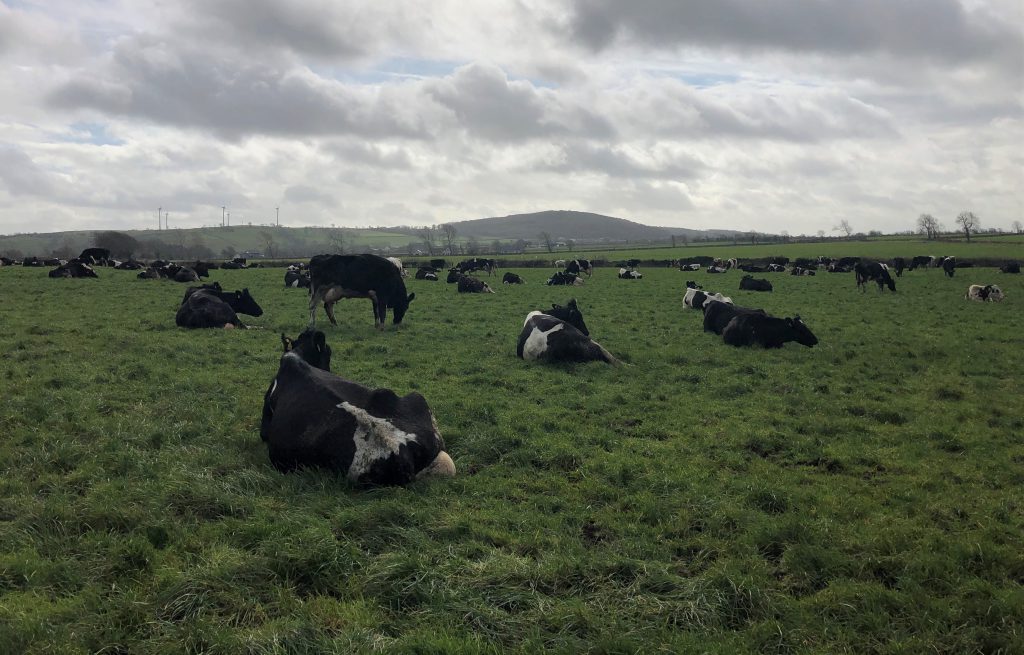 “We don’t see any reason why we would move away from the pedigree herd. They are preforming quite well for us,” Ken commented.

The farm stretches over a total area of 1,000ac; within this there are 100ac of forestry, 40ac of bog, 100ac of tillage, 80ac of willow with the rest being grassland. 250ac is allocated to the dairy block.

In 2018, a brand new 30-unit DeLaval parlour was installed and the following year, a cubicle shed was completed on the farm. The sheep handling facilities were also upgraded.

“The facilities we had were getting quite old and outdated. We also had intended to grow cow numbers and partially the interest in dairy were some of the reasons for upgrading the facilities on the farm,” explained Ken.

Previous to the installation of the new parlour, the college had been milking 180 cows through a 12-unit herringbone parlour which was taking up to three hours in the morning and two and half hours in the evening.

“When we get up to full numbers, and there is no more holding out cows or anything like that, the milking takes about an hour and a half with two people,” said Ken.

The 30-unit parlour was constructed first, which has ‘all the bells and whistles’ including: auto identification; feed to yield; automatic wash; automatic cluster removers (ACRs); a dump line; a DeLaval drafting system; a footbath; and a new collecting yard with backing gate. 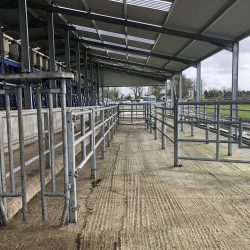 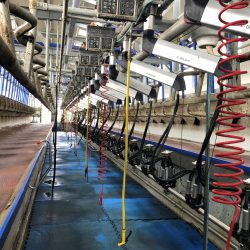 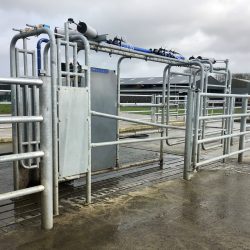 Adjacent to the parlour are some new handling facilities with both a standard crush and a herringbone crush – all covered by the one roof.

In terms of housing, before the new cubicle shed was constructed just 140 cubicles were available on the farm.

The new shed comprises of 112 cubicles along with a calving area, also all under the one roof. It is a very open shed with good air movement and wide passageways.

Commenting on its design, Ken said: “Our goal was to maximise cow comfort and minimise stress and, therefore, minimise sickness and antibiotic use.

One of our key criteria was that every animal could feed at the one time in the shed. 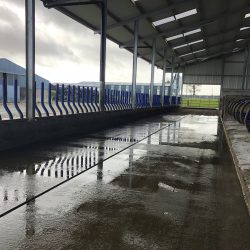 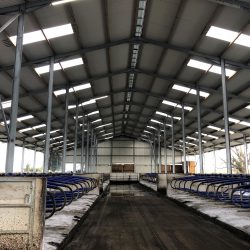 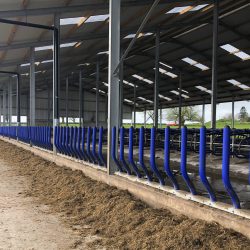 “We wanted to ensure that two cows could pass by each other comfortably while the cows were feeding because in our old shed they would have to push past each other to get by.

“There was bullying taking place and it was harder to keep them clean; whereas with the wide passageways, there is no bullying, no stress and the cows are clean,” highlighted Ken.

Some upgrades were also completed to the network of farm roadways, so as all the paddocks are easily accessible by the cows.

In the future, the college hopes to install an underpass, as presently the cows have to cross a road to access 60% of the grazing block; so the cows have to be held in the yard and let over the road in groups by someone milking.

Calving began on the farm during the first week of February and, on the day of the visit, 170 cows had calved down out of the 230 in-calf.

Asking the dairy farm manager Padraig Byrne how grazing is going, he said: “We have about 24% of the farm grazed to date, so we are a bit behind, but things could be worse.

“We had them out by day since the first week of February and they have been out day and night since last Thursday. At the moment, the cows are on grass and are also getting 6kg of meal each through the parlour.” 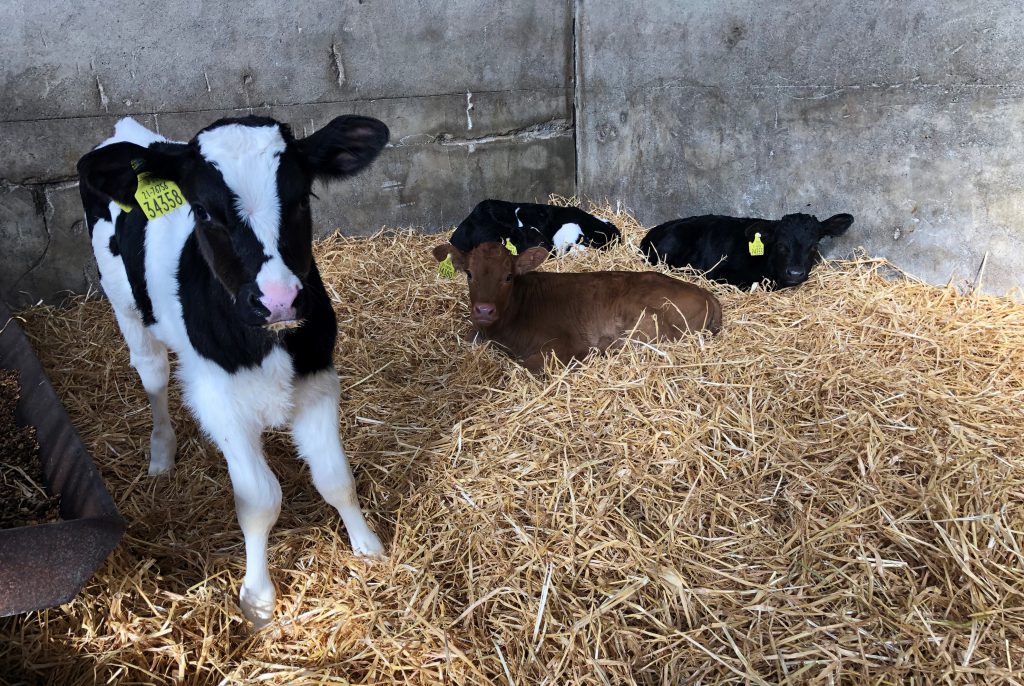 All the bull calves are sold off the farm, with the exception of 50 Limousin heifers and bulls that are kept for either replacements for the sucker herd, or are kept to finish.

Touching on calf health, Ken said it is going very well this year. Once born, the calf is tubed 3-4L of their mother’s colostrum followed by either milk replacer – after four feeds of whole milk – if it’s a heifer or if it’s a bull, just whole milk.

After an outbreak of Crypto last year, each calf has been receiving Halocur from day one up to day seven this year.