Since the expansion period began in Ireland for dairy, many people are concerned that too much debt is being put on the industry and is it all sustainable?

However, Teagasc’s Lawrence Shalloo made some reassuring comments, regarding debt levels on farms, during his presentation at the Teagasc National Dairy Conference held on Tuesday, December 3, in Killarney, Co. Kerry.

Speaking at the event, he said: “There has been a lot of chat out there that we are putting a huge amount of debt into the industry.

Using the metric debt levels per kilo of milk solids, he noted that in 2008 we were at a debt level of about €3.30/kg of MS; this has since dropped to just under €2/kg of MS.

Continuing, he said: “So when you look at debt/kg of MS, which is probably a useful ratio in terms of the expression of overall farm debt, the level has declined quite dramatically over the expansion period. 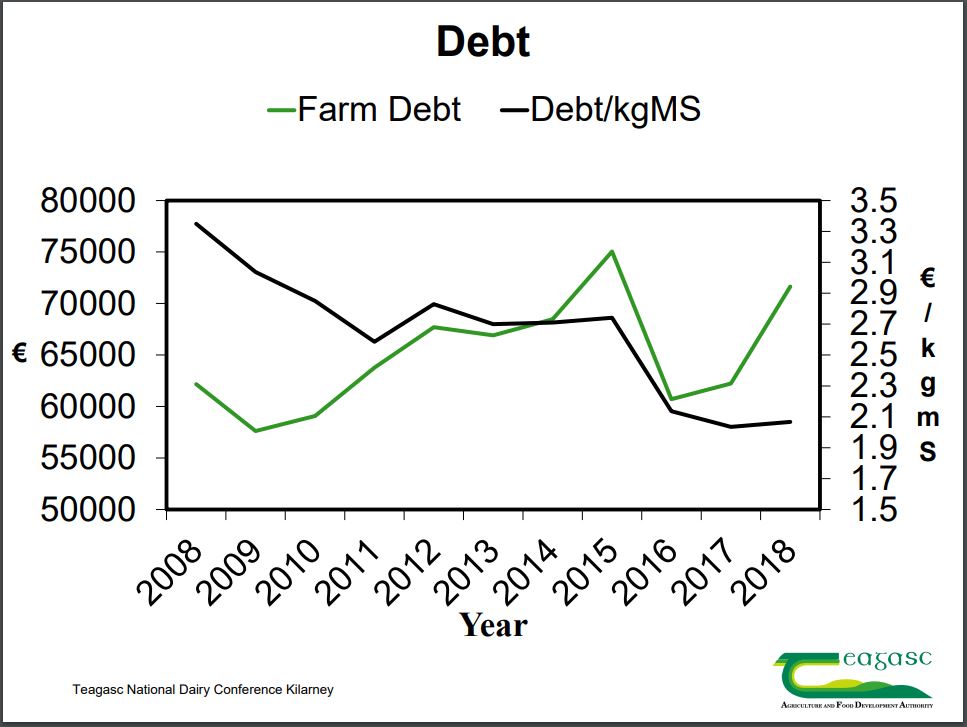 “So if we think about it – over the expansion period – what has been happening at farm level is there has been huge investment on farms, while at same time debt level has been reducing.

“I think by any standard in any industry across the world that is hugely, hugely impressive,” he added.

During his presentation, Lawrence also referred to some other changes which have occurred since quotas were abolished.

What this means is we have expanded quite quickly or quite aggressively at farm level.

“As there has been quite a strong increase in MS/cow over that period of time,” Lawrence noted.

Looking at family farm income, at a fixed milk price and at a constant milk price, he said: “Family farm income has increased by €23,000/annum. Although what you have done as farmers, in terms of increasing fat and protein percentages, has resulted in a 2c/L increase in milk price – on average – on farms.”