CSO correction: How have the crop areas changed?

Following on from the correction to the 2019 crop area figures by the Central Statistics Office (CSO) released on Friday, December 6, AgriLand takes a closer look at the figures.

The crop area figures are now almost on a par with those released to AgriLand by the Department of Agriculture in October, although a slight change has occurred in the department’s figures for the barley area.

The department increased the area sown to barley by approximately 300ha, according to the table below. The department sent an updated file to the CSO on November 22.

The total cereal area has increased by 2%, despite the CSO reporting a decline of 6.4% in September. 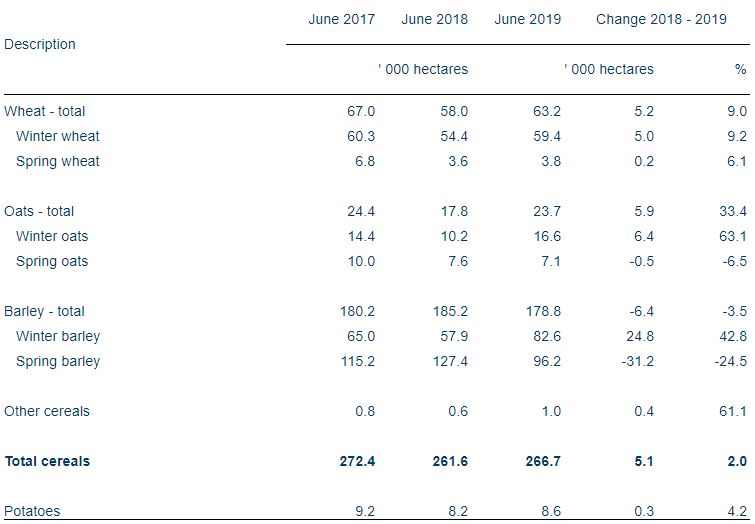 *It should be noted that the CSO rounds off the figures to the nearest hundred.

On November 14, AgriLand unveiled an anomaly in figures which it received from the Department of Agriculture and the CSO.

On December 6, the CSO released a correction, which is also printed on its website.

“The statistics on the area under crops in June 2019, published on 18 September 2019, have been revised on foot of corrected raw data. This means that the Headline Table, Figures 1 and 2, and Table 1 of the release are revised. The corresponding commentary text has also been revised.

“The revision is based on revised data received from the Department of Agriculture, Food and the Marine (DAFM) Basic Payment Scheme (BPS) system on 22 November 2019. The revised data from DAFM corrected discrepancies in the BPS data used in compiling the release issued by the CSO on 18 September 2019.”