Creed and Hogan meet to discuss agriculture’s ‘many challenges’ 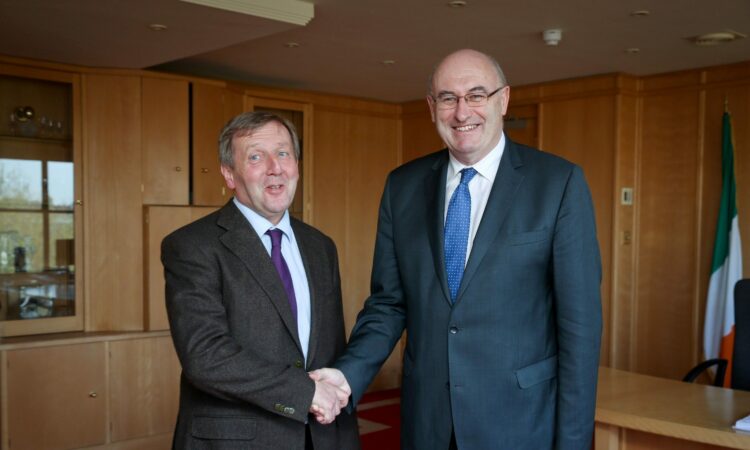 Michael Creed met with European Commissioner for Agriculture and Rural Development, Phil Hogan, yesterday evening for the first time since the Minister’s appointment.

The Commissioner and the new Minister for Agriculture “informally reviewed” what the Department of Agriculture called “current agriculture issues.”

Among the issues discussed were the ongoing market difficulties being experienced by farmers and the responses required to mitigate their impact.

In addition, the latest developments in international trade negotiations, including in relation to Mercosur and TTIP, were discussed, as well as agriculture-related elements of the Programme for Partnership Government.

“I was determined to have this early engagement with Commissioner Hogan, which served as a very useful opportunity for me to outline the Irish Government priorities for the European agenda over the coming months and for us to establish a solid basis for our future working relationship,” Creed said.

I look forward to working closely with the Commissioner over the coming period as we deal with the many challenges currently facing the agriculture sector.”

“I was pleased to meet Minister Creed and I wish him every success in his new role,” said the Commissioner.

“This is a challenging time for the sector and constructive engagement between all policymakers is essential to ensure continuing support for our farmers and agri-business”.

Creed was first co-opted to Cork County Council in 1987. He was first elected to Dáil Éireann in 1989.

He was the Chairperson of Cork County Council for the period 2005/06.

A Macroom native, Creed is married to Sinead and has three children. Last week he replaced Minister Simon Coveney as Minister for Agriculture, as Coveney has taken over the Housing and Local Government portfolio.