Irish milk production continues to surge ahead (up 13.3% in June)

Domestic milk intake was estimated at 825.1m litres for June 2015, figures from the CSO show.

The CSO says that, comparing the June 2015 milk produce figures with those for June 2014, total milk sold for human consumption decreased by 4.7% to 38.6m litres. 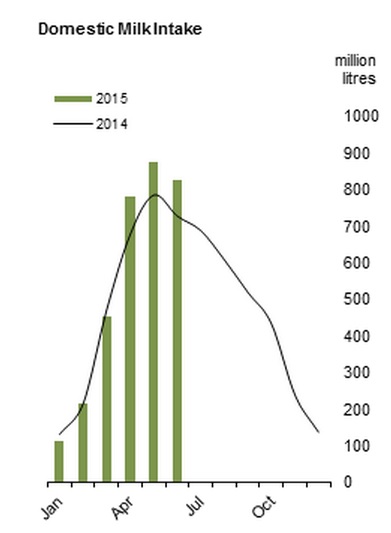 Irish milk production was down in Q1 due to quota constraints, but a surge in production has been observed in Q2, according to Teagasc.

It says that lower milk prices may temper milk production growth in Q3.

It forcasts that an annual increase in Irish milk production of 10% looks likely, with considerable regional and farm level variability around that figure.

Despite lower milk prices, EU milk deliveries in 2015 are expected to be nearly 1% above 2014, according to the European Commission.

However, the Commission data shows very different developments in the different Member States, with a few countries where milk collection increased strongly from the first day after quota expiry, while in other countries no such development is observed.