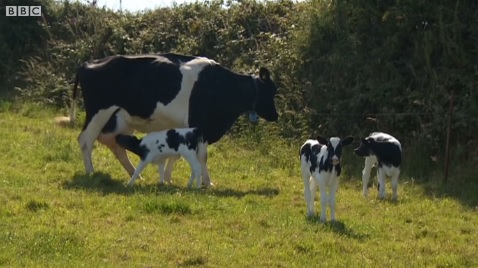 One UK farmer went to check on his cow calving recently and instead of the two calves they thought she was expecting, they found three.

The Friesian Belgian Blue crosses have been called May, June and Juliet.

Bernard Hoskins, a farmer from Cornwall, told the Mirror she was obviously calving when he went in for breakfast and when he came back after breakfast she had already had two of the calves, while a third was on the way.

“She got on with it really quickly.

“We’ve never had triplets before, I’ve never even heard of anyone having triplets before. I think we will keep them, they are a bit special to us now,” he told the paper.

Hoskins’ daughter Lowenna, speaking to the BBC said that her father turned around to her and told her there were three calves.

“He turned around and gave me a cheeky smile and said there’s not just one there’s three. So we came bombing up from the milking parlour and there they were, all up sucking, happy. Three little Belgian Blues.”

Carol Hoskins told the Mirror that they are absolutely gorgeous.

“She gave birth in our field all on her own, we were told she was expecting twins so we were very surprised to find she had three.

“We saw the first two and thought, ‘oh that’s lovely’ and then there was another one under the hedge.”

The Hoskins run Greenacres Farm, where they have 150 cows, as well as some sheep, pigs and hens, according to the Mirror.