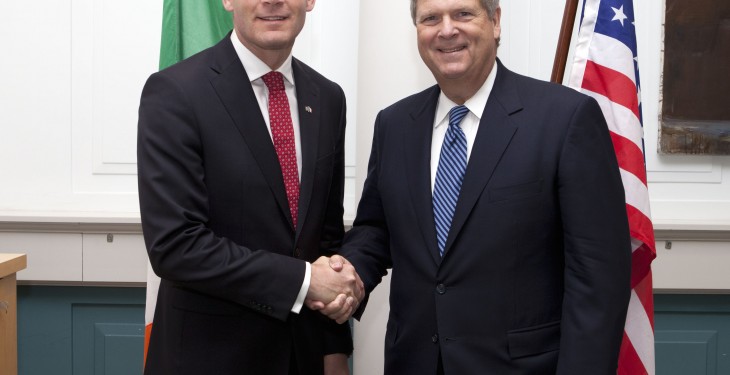 Farmers cannot expect miracles from the beef summit, the Minister for Agriculture, Food and the Marine Simon Coveney has said.

Speaking on RTE radio from Washington today, he said that after just two meetings of the beef summit farmers should not expect miracles.

“Farmers called on me to set up the forum. We only have had two meetings to date. People can’t expect miracles.” He said weakened markets and increased production levels in Europe had resulted in reduced beef prices and it’s not just Irish farmers who are affected.

“Irish beef prices are still higher than the other EU15, so they (farmers) are getting more than the average EU farmer. But it is a lot less than last year so it’s putting them under pressure.”

He denied that he had sided with meat processors and dismissed claims that the beef summit is a ‘talking shop’. “It’s not true that I have sided with the meat factories. I am the first Minister ever to set up a beef forum…to allow the industry to thrash out issues.”

He also said that the live cattle trade has increased by 20% this year and he is working hard at opening up new markets, including the US and China. “There is a lot happening here to reassure farmers.”

He said he is very close to getting access to a potentially very lucrative market for the Irish beef industry. “There is a team of inspectors coming to Ireland in a week’s time and we are expecting that will go well. Our factories are inspected on a regular basis and there are no issues.”

He said the US Agriculture Secretary, Tom Vilsack, indicated to him last week that “as long as the inspection goes well this is a done deal”. Such a deal, he said, would help improve beef prices for farmers here.

The US market he said is a niche market, for ‘green’ beef or ‘natural’ beef, which is beef that does not use growth promoters or GM feed and is grass fed. The value of this market, he said, is about €700m a year. “I don’t want to over estimate the size of this market, but it will grow and it is significant.”