The Department of Agriculture, Food and the Marine has published a list of beneficiaries of Common Agricultural Policy (CAP) payments in the Republic of Ireland for 2017.

The department is obliged, by EU regulations, to publish a list of all beneficiaries of CAP funding – once they receive more than €1,250 – by the end of May each year.

Yesterday, we outlined the top 10 beneficiaries of CAP payments – from those whose payments were predominately made up of direct payments.

But who received the highest payment in your county?

In Leinster, a total of 30,951 farmers or companies received money under CAP last year; these payments added up to just over €500 million.

Meanwhile, CAP payments equating to almost €610 million were divided between just over 42,500 beneficiaries in Munster.

Last year, CAP payments to farmers and companies in Connacht totalled in excess of €393 million.

Over 38,000 recipients benefited from these payments.

Furthermore, the number of CAP beneficiaries located in counties Donegal, Cavan, Monaghan and Northern Ireland amounted to about 18,000 – with payments totalling nearly €186 million.

Just over €283,000 of that money went to recipients in Northern Ireland. 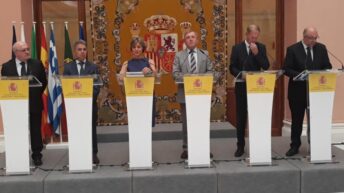