Sustainable and climate-compatible farming “must mean the end of the cheap food policy”, according to the Irish Creamery and Milk Suppliers’ Association (ICMSA).

Lorcan McCabe, the association’s deputy president, also argued that the “overwhelming and destructive dominance of the corporate retailers will have to be faced up to if the farming and food reforms necessary…are to have any chance of success.

McCabe was speaking after meeting with the UK Competition and Markets Authority (CMA) in Belfast today, Friday, November 15, where he represented the ICMSA. The meeting was attended by a number of farmer and primary producer organisations from across the islands of Ireland and Britain.

According to McCabe, these organisations “made common cause in persuading the CMA that the reforms that were already necessary and long overdue – on the questions of margins and the systematic erosion of farmers’ share of the final retail price – have now become more urgent”.

“What was so striking was the similarity of the complaints from right across the organisations and the similar levels of frustrations at the inability or unwillingness of our governments to actually face up to the role the corporate retailers have played in destroying farmer margins,” McCabe said.

He also highlighted “the consequences that the Government’s tolerance for this policy of artificially cheap food has had – and continues to have – on efforts to make farming and food production more sustainable”.

“It’s more obvious than ever that the new environment within which farming and food production will happen must mean – has to mean – the end of the cheap food policy that has been operated by the EU and the EEC before that,” McCabe argued.

Many consumers have not yet grasped this fact, and both they and the corporate retailers seem to believe that all the changes will be happening ‘behind them’ in the supply-chain – in other words, at farm level.

“What came across loud and clear at today’s meeting is that this won’t be happening and the changes involved – and the cost of those changes – is going to have to be borne by everyone and most particularly by the corporate retailers who are the ones doing best out of the present untenable system,” the ICMSA deputy president highlighted.

McCabe concluded his remarks by saying: “If the corporate retailers imagine that they’re going to be allowed to remain untouched by the changes, then they’ve another thing coming. And it’s going to have to be governments that break the news to them.” 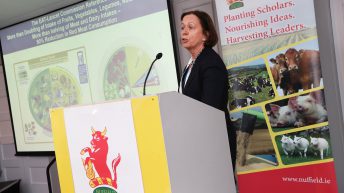