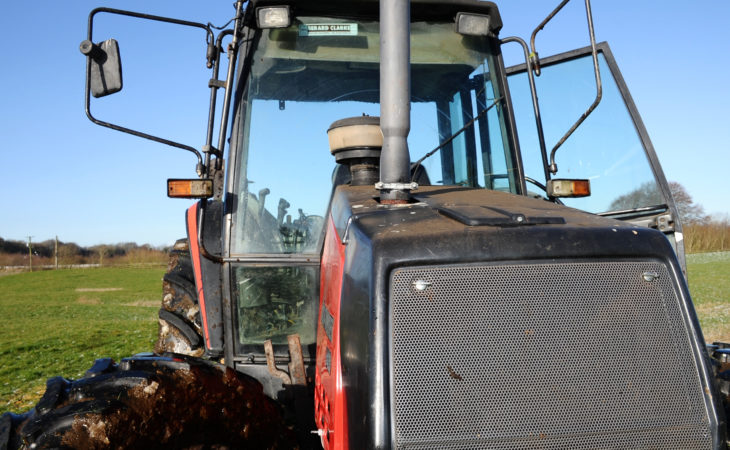 Any tractor – Valtra or otherwise – that finds itself in a contractor’s fleet can usually expect a hard life. They are not bought for decoration and are required to earn their keep.

Any that fall short of the demands placed upon them are soon weeded out and sold on. What, then, to make of an example that is not only 23 years old but still working on a daily basis and, according to its owner, “has never had a spanner laid on the engine since new”?

Such a machine is apparently the Valtra Valmet 6400 belonging to James Geoghegan of Tyrellspass, Co. Westmeath, who bought this model back in 1995. 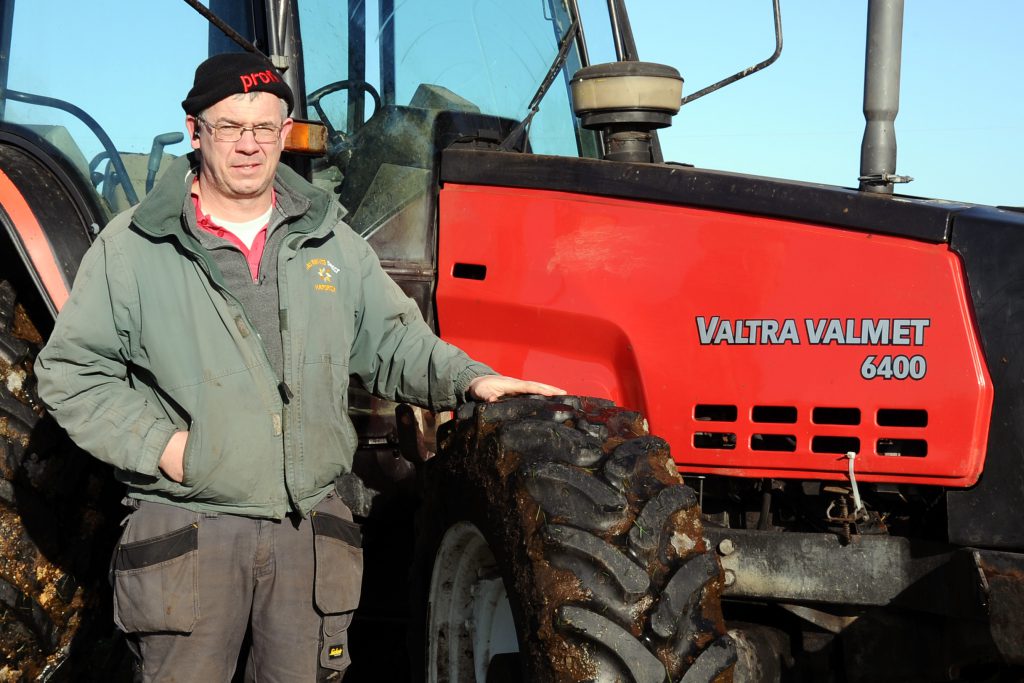 He did not set out to buy a Valtra (or a Valmet) at the time. He had his mind on a Fiat 100-90 DT, but was persuaded to try the Valtra for a week by Gerard Clarke of Clarkes Farm Machinery. He was so impressed that all thoughts of the Italian machine evaporated and the Finnish-built tractor stayed. 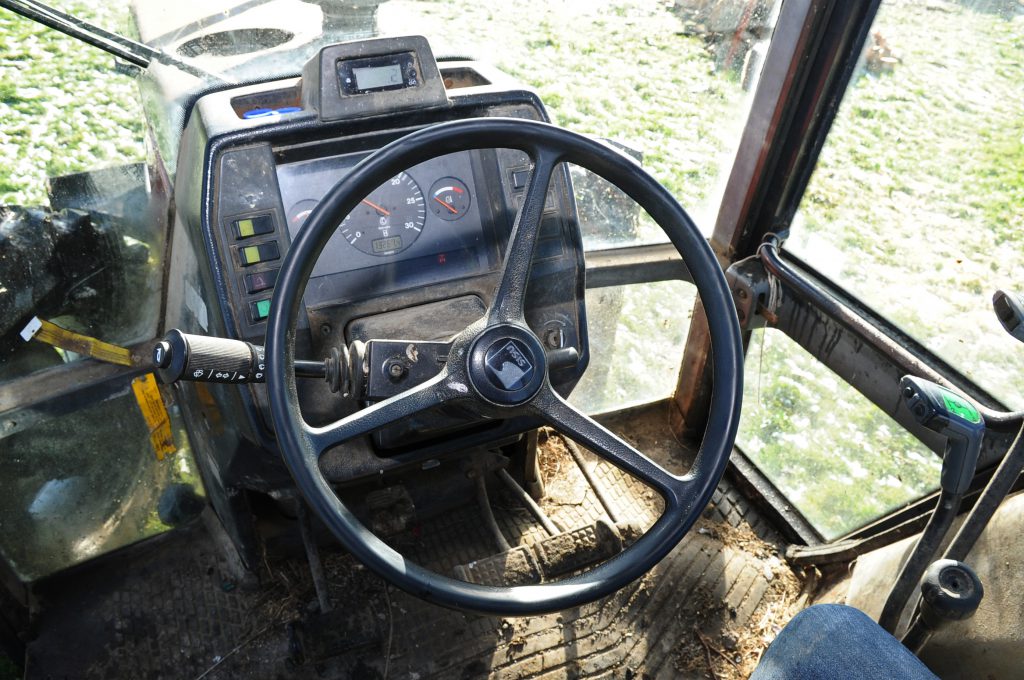 At the time, any tractor around 95hp was considered to be reasonably big in the area; its Scandinavian origin was also considered a novelty. Yet it was a pioneering move; James can now count 35 Valtras in use locally within a few miles of his home farm.

He has stuck with the brand ever since and has five in his present fleet. 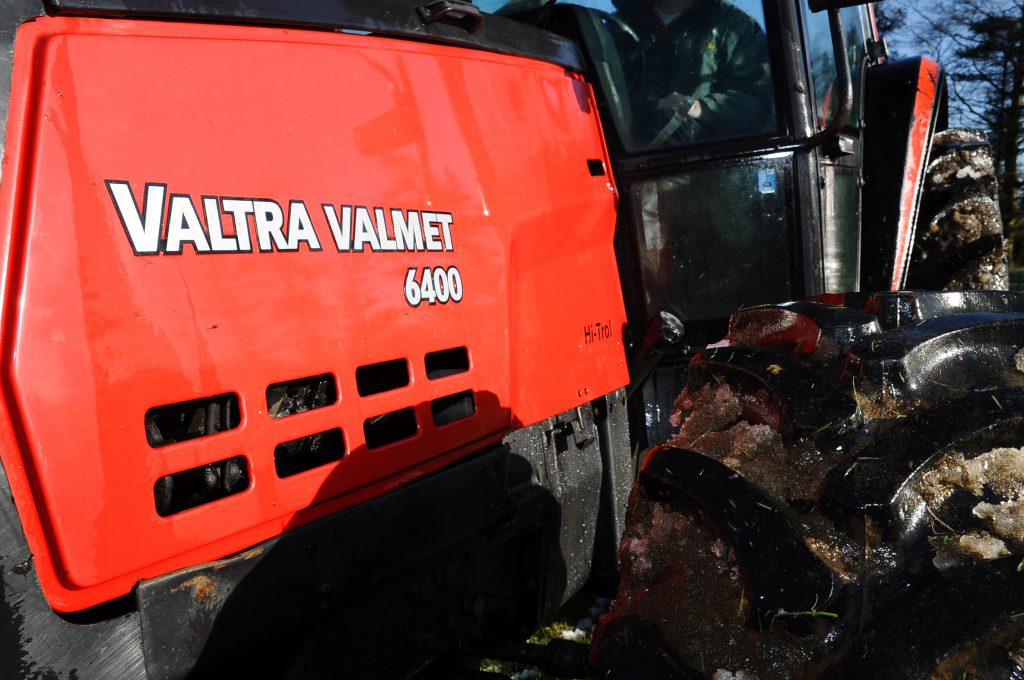 The Valtra Valmet 6400 belongs to the company’s ‘Mezzo’ range; its lineage can be traced right back to a joint venture between Volvo BM and Valmet. An exercise known as the Nordic Tractor Project was initiated in 1979, when the two companies decided to create a brand new tractor between them. 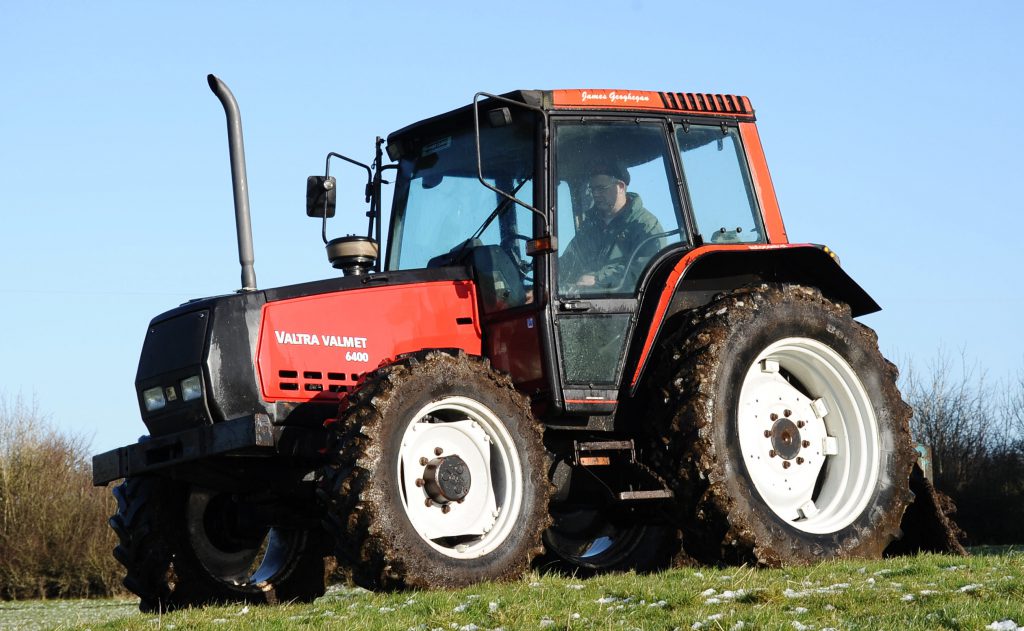 That is how it was sold to the public anyway, but behind the scenes Volvo BM had decided to get out of tractor production altogether and concentrate on construction equipment instead.

The plan was to keep its factory at Eskilstuna busy making tractor parts, while it gradually phased production over to earth-moving machinery.

The new tractor that resulted was a joint design. It took little more than two years to get to market – a remarkable achievement. Yet; no corners were cut and these machines became the foundation upon which the modern Valtra tractor company was built.

The guiding principles for the design, at that time, not only included usual features such as “low cost” and “high reliability” but also high ground clearance, 4WD as standard and “robust fixing points for permanently-installed implements”.

The largest of the first wave of ‘Nordic Tractor Project’ models was the Volvo BM Valmet 805. It produced 95hp from its four-cylinder, turbo-charged engine (and was actually available in 2WD as well as 4WD).

A decade later the ’05’ range was completely revamped and relaunched as the ‘Mezzo‘ series with a new styling and naming system (although they were still ‘Nordic Tractor Project’ machines at heart).

By this time, Volvo had bowed out of the scene altogether and the slightly less clumsy ‘Valtra Valmet’ had been adopted as the brand moniker. 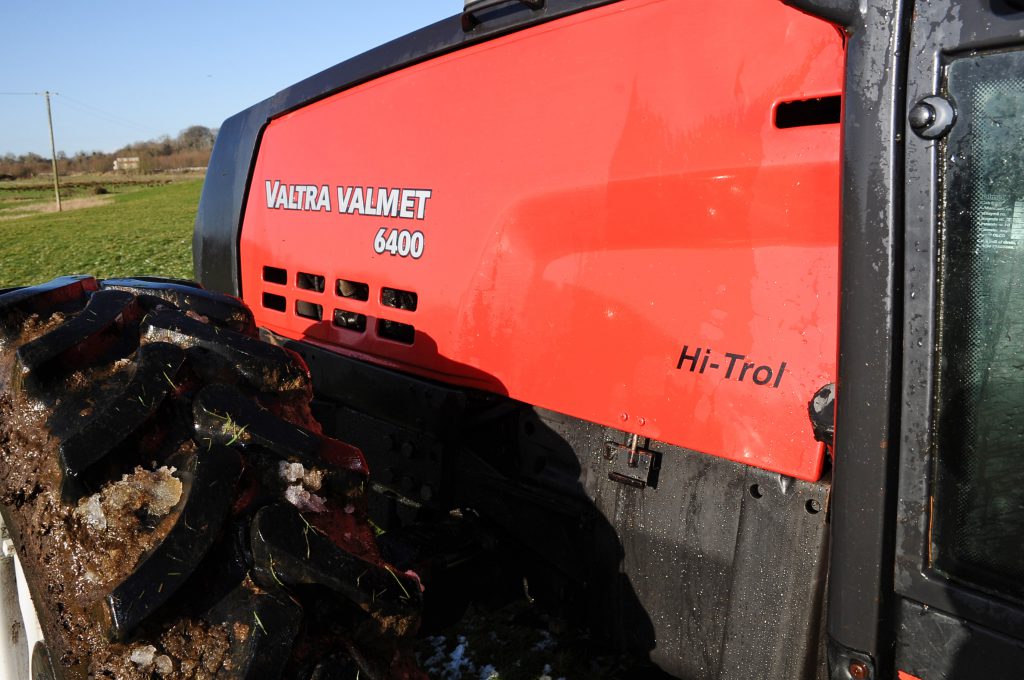 Even this name was only a temporary arrangement. It was obliged to drop the ‘Valmet’ component by 2001 – due to the state-owned Valmet company privatising itself during the 1990s (a move which included the sale of the tractor division). 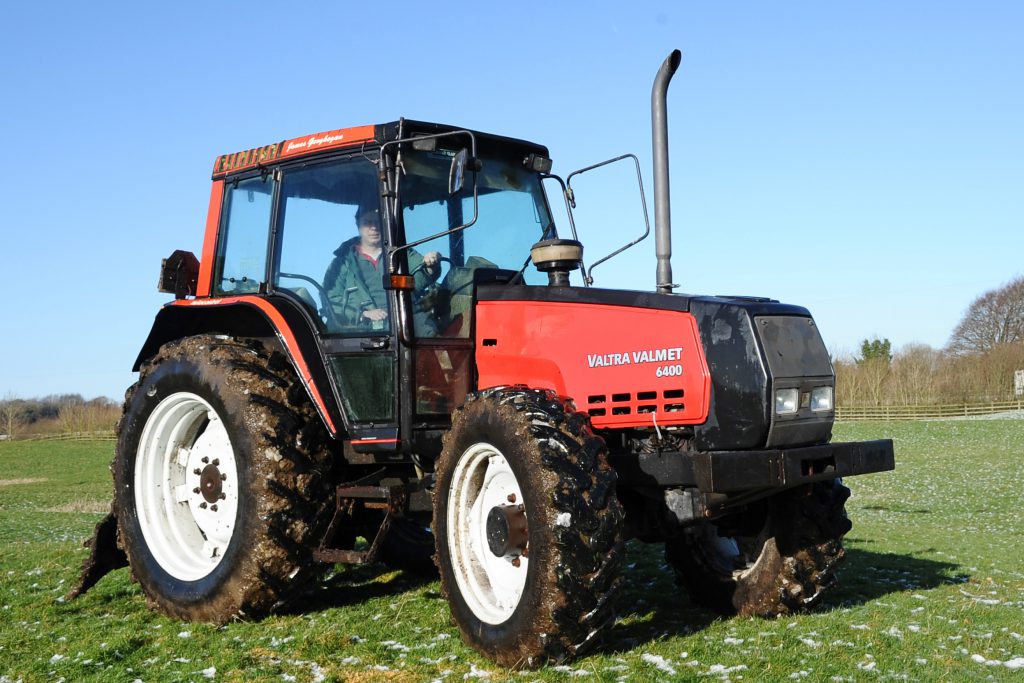 The Mezzo tractors were largely the result of a cancelled collaboration between Valmet and Steyr. Steyr had to withdraw from the agreement on its banker’s orders, leaving Valmet to finish the development of the engine, cab and transmission.

The designers retained all the novel features built into the original ‘Nordic Tractor’. The fuel tank was still situated between the engine and gearbox (with the prop-shaft running through it to the front wheels).

The weight distribution remained a useful 60% front / 40% rear split, thanks to the engine being mounted directly above the front axle. The engine was a new ’20’ series unit that had been jointly developed with Steyr; it featured wet liners with mid-cylinder supports to reduce vibration.

The Valtra Valmet 6400 pictured here (owned by James) belongs to the second generation of the Mezzo range. In 1994, several changes were made – including a new turbo-charger (which brought torque up to 390Nm – from 365Nm). 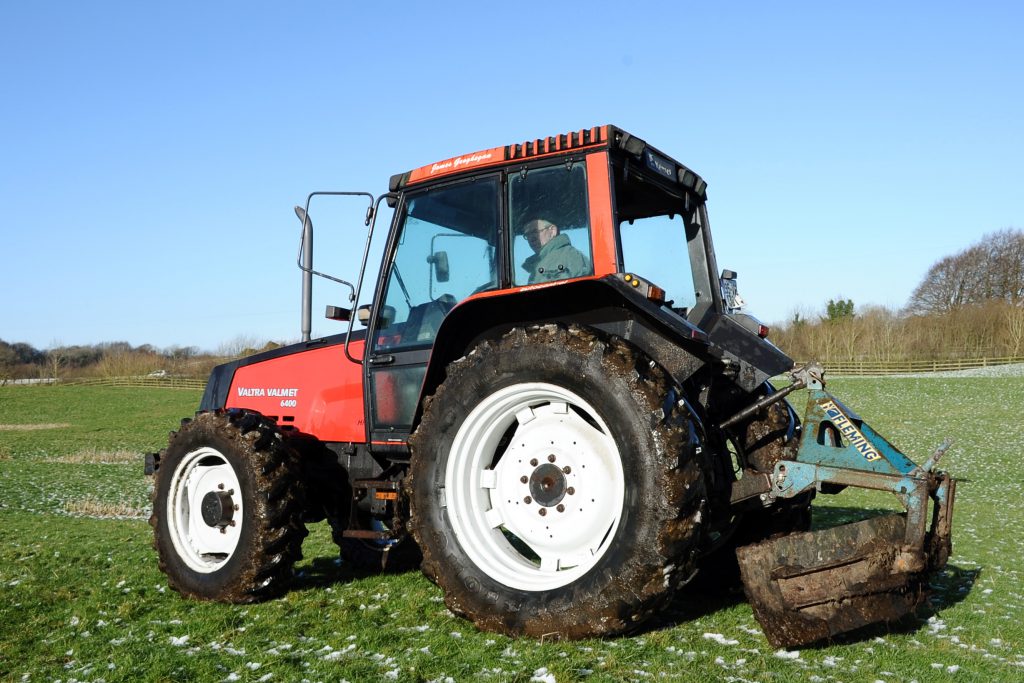 The following year saw the first appearance of the new Sisu-Valmet ‘shoreline’ logo which, apparently, was a desperate measure by a group of public relations consultants who couldn’t come up with anything more original as a badge!

One other great innovation of the time was the ‘Hi-Trol‘ clutch. This ‘fluid flywheel‘ had first been fitted to the company’s logging machines back in 1971 – to help protect the standard (dry) clutch and engine from slipping and shock loads.

Interestingly, Fendt had a broadly similar arrangement with its ‘Turbomatik’ tractors; yet Valmet would claim that its was the more advanced system.

James is a great fan of the Hi-Trol set-up.

He holds it firmly responsible for him winning several tractor pulling contests (many moons ago), when the ‘classes’ were categorised by power rather than weight. 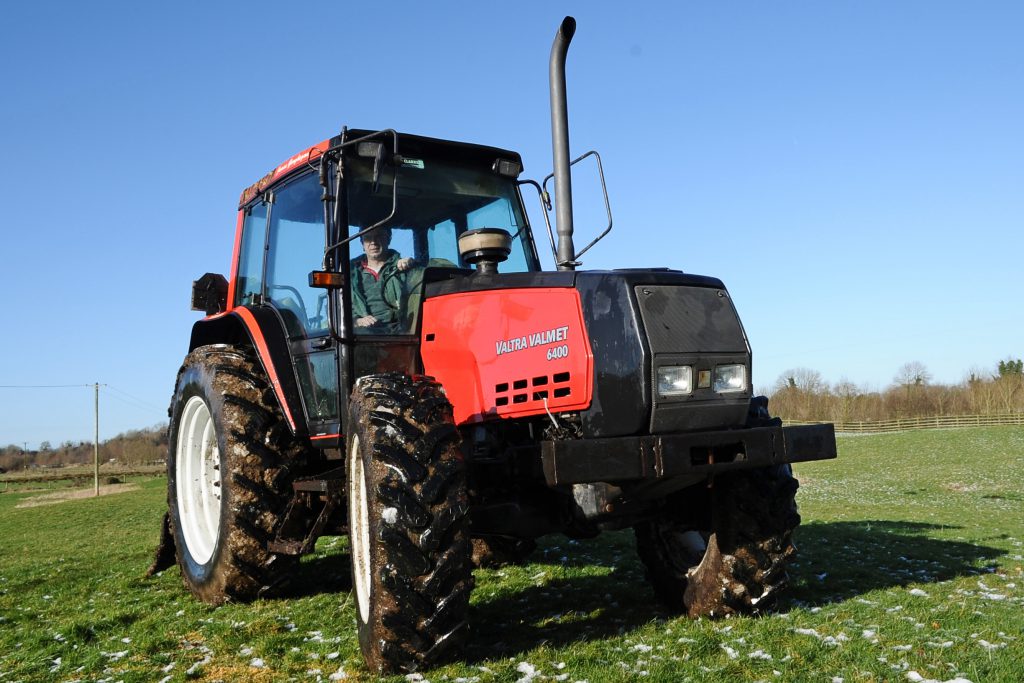 Despite the hard labour of contracting work, the tractor has apparently been remarkably trouble-free. The only major repair was needed when a small leak caused the transmission oil level to run low. New clutch and brake packs had to be fitted as a result, but “there has not been the slightest spot of bother since”.

She has worn out three slurry agitators.

He still uses the tractor for this job, as well as raking during the silage season.

It certainly looks a little like a tractor that has had to earn its keep over the years. The side panels and wheels received a respray last year but, otherwise, it’s very much an original machine.

There are no immediate plans for a full restoration; it’s kept too busy for such a lay-off. Nor are there any plans for selling it; James is far too attached to the old girl for that to happen anytime soon.

Below is a video showing some of James’ other Valtra tractors in action – during last year’s silage campaign in Co. Westmeath. 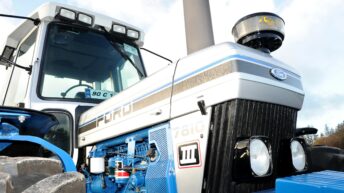 Classic corner: Even a troubled story has a ‘silver lining’