Four sixth class pupils from Cratloe, Co. Clare, won the best project book award for their entry ‘Cows, The Good, the Bad, and the Ugly’ in the national final of the Intel mini scientist awards at NUI Maynooth, on Monday last.

Meabh McGonagle; Jennifer Mullen; Kate Strogen; and Meabh Keenan are all pupils in Saint John’s primary school, Cratloe. While they don’t live on farms themselves, they have one or both parents from farming backgrounds and visit farms owned by uncles, grandparents and cousins. 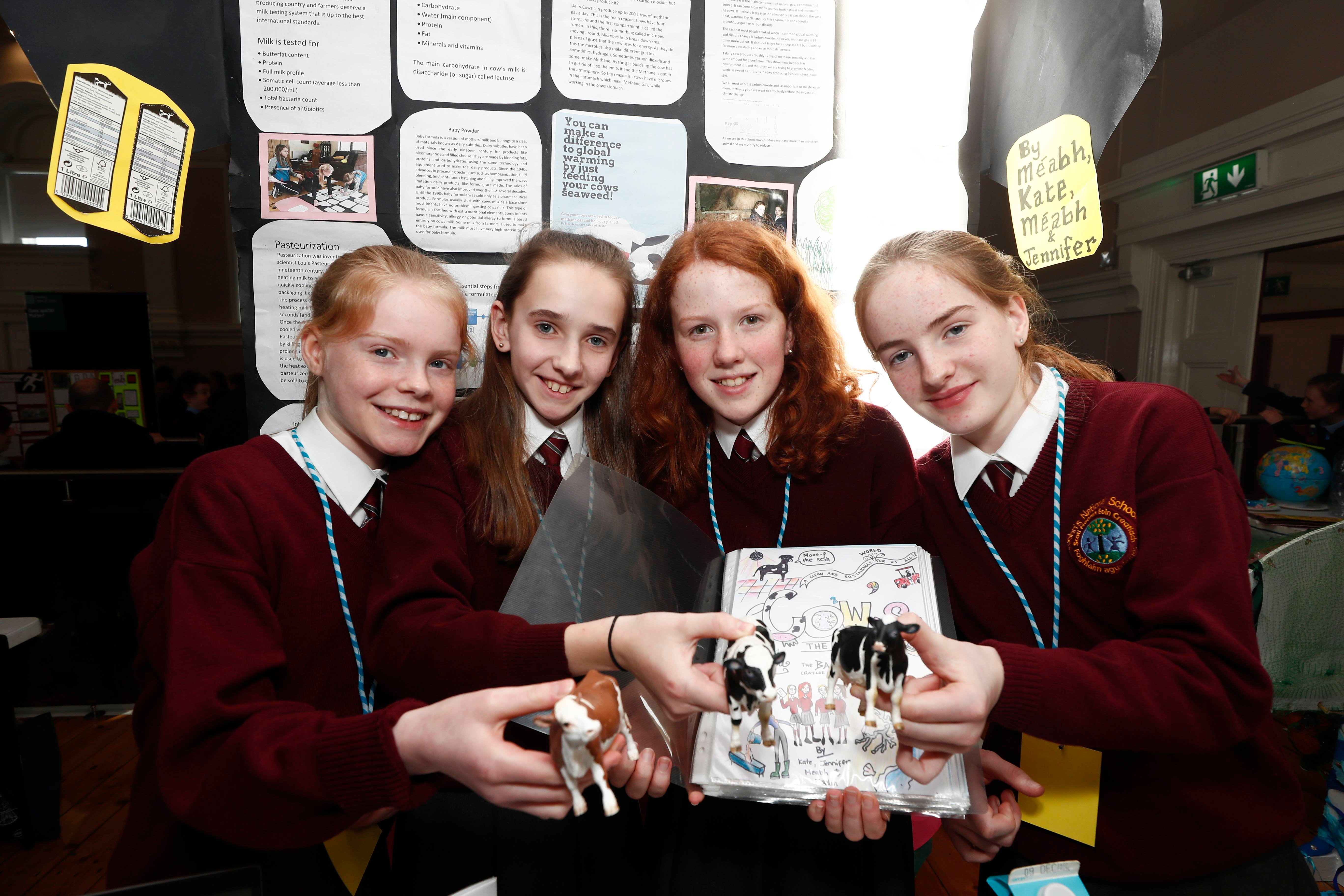 “We came up with the idea as we were looking for something topical. ‘Cows, The Good, The Bad and The Ugly’ looked at the good effects of the huge dairy industry. In particular, we looked at the production of baby formula and visited Wyeth to research this,” they said.

The girls designed a questionnaire and distributed it to family and friends and also visited the mart in Sixmilebridge to survey farmers. They set out to discover whether farmers knew about feeding seaweed to cows and its effects and also if they would be willing to try it on their herds.

“We sourced seaweed and cattle feed containing seaweed – Titan seaweed – and fed it to a relative’s cow. We produced posters encouraging farmers to do likewise and displayed them locally and wrote to the Irish Farmers’ Association [IFA] about our findings,” they said.

We also posed the question: ‘Would we be better off without cows?’ For this, we went vegetarian for two days. We surveyed the pupils in our school to see if they would be willing to go without all the dairy products provided by cows. Our findings showed that a huge majority were not willing to give up beef and dairy products.

The project was ongoing since last October when their school began by encouraging pupils from fourth to sixth class to participate in the Intel competition. Led by Ms. Gleeson, they formed teams and began the project work, meeting after school at their houses to research and work together.

“There is a very strong tradition of participation in this competition in the school and a huge focus on science, technology, engineering and math [STEM] by our teachers,” the girls said.

“We were delighted to win the school level and then go on to the regional final in Shannon. To be selected to represent the region at the All-Ireland was high reward for all our hard work and we were very pleased to be awarded best project book,” they said.

“The tremendous support and good wishes we received from our teacher, principal and all our friends in school made this very special and unforgettable. We learned a huge amount about cow emissions and the dairy industry, but above all learned fantastic skills working as a team and presenting to the judges. We enjoyed every minute of it.”