Claas marks major landmark as the 50,000th Lexion combine rolls off the line

CLAAS celebrate their 50,000th LEXION: Shareholders, employees from Technical Development , Assembly and other involved departments in front of the jubilee machine.

Claas – the German machinery manufacturer has marked a major landmark as its 50,000th Lexion combine has rolled off the production line.

According to Claas, the high capacity Lexion combine harvester has become the flagship of international agricultural technology over the past 21 years.

And to mark the 50,000th model, Claas has designed a jubilee model which can be seen at many fairs and exhibitions across Europe over the coming months.

The company says that the Lexion combine took almost a decade to develop and the first Lexion combine harvester – the 400 series was offered to farmers in 1995.

According to Claas, the development of the Lexion combine established a new premium segment for agriculture.

And in 2001, it marked the manufacture of its 10,000th combine – a 415 horsepower Lexion 480 with rubber tracks and a potential harvesting capacity of 40t of grain per hour.

In 2003, the Lexion 500 series was introduced as the next line of top-class combine harvester.

Larger harvesting capacities and refined technical systems on the Lexion 500 series made the operator’s work far easier, it says.

It says that the Claas Lexion 600 series provided farmers with a further increase in efficiency through its harvesting capacity of up to 70t of grain per hour.

The company also says that it set a new milestone in the history of combine harvesters in 2013, with the launch of the Lexion 780.

Besides a grain tank with a capacity of 13,500l, it is equipped with the integrated CEMOS AUTOMATIC driver assistance system.

The software controls specific default values set by the farmer, and after a short period of time it finds the optimum settings for the threshing systems.

By taking into consideration the changing harvesting conditions during the course of a day, these optimum settings are checked on a per-second basis and adapted continuously.

The LEXION 700, which now features a 4D cleaning system and an automatic crop flow control system, received the ‘Machine of the Year 2016’ award at the world’s largest agricultural technology fair Agritechnica. 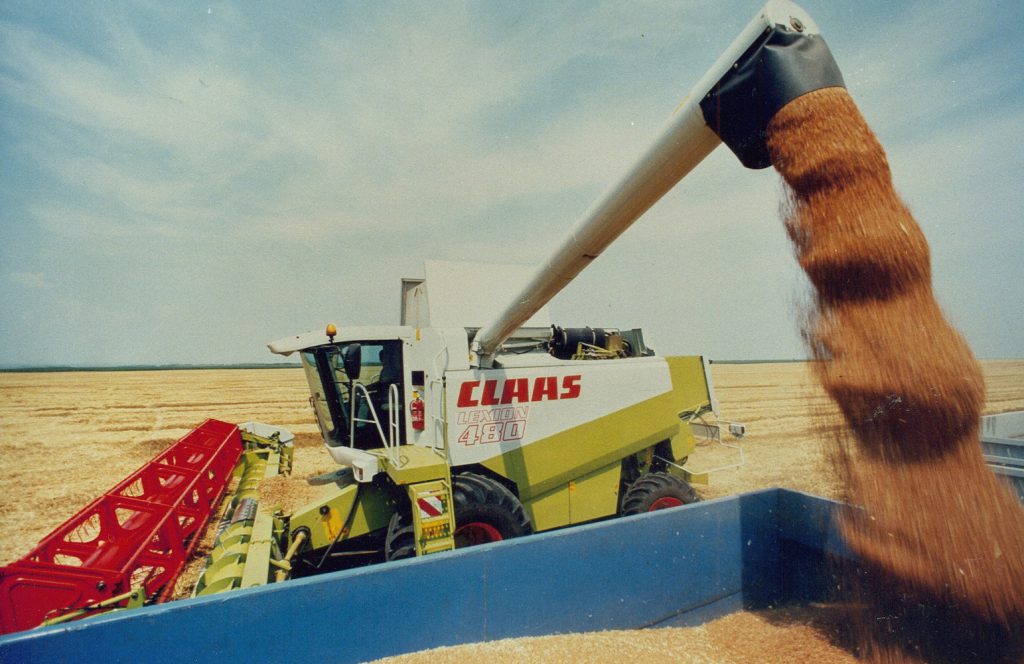 Now a historic photo: In 1995 Claas introduced the first LEXION models to the market.